The Life of Bald Eagle C52 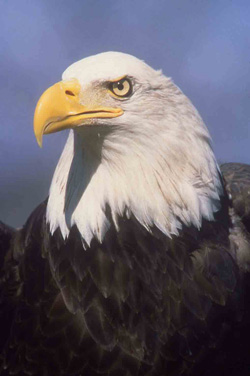 The bald eagle that would be designated C52 hatched in the Tongass National Forest on Couverden Island, Alaska, in June 1988.

On July 24, 1988, he was selected from his nest by the U.S. Forest Service and U.S. Fish & Wildlife to be a part part of Indiana’s Bald Eagle Reintroduction Program. The next day he was weighed, measured, and prepared for travel. His age was estimated to be 43-days-old.

The eagle arrived at Monroe Lake on July 26 and was tagged with a letter and number. C52 was placed in Hack Tower Cage A with mates C43 and C44. Staff and volunteers observed of the progress of the eagles and spotted trouble with C52's right wing on Aug. 27.

C52 he was removed from the hack tower and taken to a veterinarian for examination on Aug. 31. He was then sent to the Raptor Rehab and Research Center at University of Minnesota for further tests and evaluations. The staff determined that C52 was unreleasable due to a genetic defect in his right wing that kept the wing from flexing during flight.

C52 was flown to Indianapolis and DNR staff transported him to Patoka Lake on Jan. 23, 1989.

C52 helped educate more than 100,000 people until his death in October 2009. Throughout his stay at Patoka Lake, tumors grew on the undeveloped wing and had to be surgically removed. In September 2009, C52’s behaviors changed and his breathing became labored and raspy. Upon examination, the veterinarian found a large fluid filled mass inside of his lower body cavity. He was rushed into emergency surgery to remove this mass, but unfortunately he died.

C52's legacy lives on at Patoka Lake. Staff found him a joy to work with and good teacher of important lessons regarding birds in captivity. Work continues in his honor with other birds that have met unfortunate circumstances and are unable to survive in the wild.