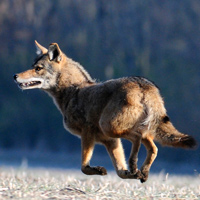 Coyotes (Canis latrans) are native to Indiana and were often called “prairie wolves.” Before the European settlement of Indiana, coyotes were primarily restricted to prairie regions of the state. Today, coyotes are found throughout Indiana, including urban areas. 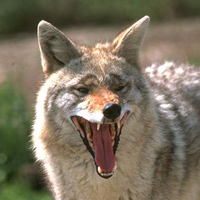 Coyotes are present in all sections of the state. There are records of coyotes in Indiana as early as 1816, though the species likely inhabited Indiana well before that time. Bounties on coyotes were in place in Indiana from at least 1849 through the late 1960s. Despite this persecution by early European settlers and later residents, coyotes persisted in Indiana. Historically, coyote populations were limited in range to the prairie regions of the state, and expansion may have partially been limited because wolves suppress coyote populations. However, with the eradication of wolves and conversion of habitat to farmland, coyotes have expanded and adapted to new habitats. Statewide coyote abundance slowly increased as coyotes continued to expand into previously unoccupied habitat. Today, coyotes occupy all of Indiana, no matter the habitat type or amount of development.

Coyotes may pair for life. They mate in February, and a litter with an average of four to six pups is born in a den in April. Dens may be located in a bank, rock outcropping, cave, or an enlarged woodchuck or rabbit burrow. Males help raise the pups and provide the female with food when pups are very young. Pups begin playing at the entrance of their den at 3-to-4 weeks old, and by 10 weeks they may leave the den completely. Pups learn to hunt during the fall and generally disperse before they turn 1 year old. Occasionally, a female yearling or two may stick around another year and help raise the next year’s pups.

Hunting and trapping are important components of managing coyotes in Indiana. However, not all coyotes are problem coyotes. Many coyotes live around people, pets, and livestock and never have negative interactions with them. When coyotes become habituated to people, problems can occur, and those animals may need to be removed. Similarly, when coyotes begin to prey upon livestock, those animals may need to be removed to stop the damage from occurring. Removing coyotes not causing problems around livestock can encourage new coyotes to move in which may cause damage.

People’s behavior is usually a key component in habituation occurring, so it’s important for people to do their best to discourage coyotes whenever possible.

Landowners may take coyotes year-round on their private property by trapping or shooting without possessing a wild animal control permit from the DNR and without having a hunting or trapping license. Additionally, a landowner does not need to possess a wild animal control permit from DNR to give another individual written permission to shoot or trap coyotes on the landowner’s property. However, any person taking coyotes on someone else’s property must have a valid hunting or trapping license and, if the take happens outside the regulated coyote season, must have written permission from the landowner. Please note that any firearm, archery, or air rifle equipment used for coyote removal may be used only in accordance with local ordinances.

Individuals may also get help with coyote conflicts by contacting a licensed wildlife control operator.