Beavers (Castor canadensis) were once rare in Indiana due to overharvesting but are now abundant. In 1935, the Indiana Department of Conservation obtained a few breeding pairs from Wisconsin and released them in Jasper-Pulaski Fish & Wildlife Area. Beaver populations expanded, aided by strategic relocations to certain parts of the state to help with expansion. Presently, beavers are found in almost every county.

Are you a paddler interested in helping conserve and manage wildlife for future generations? Consider volunteering for the Paddlecraft Wildlife Index. 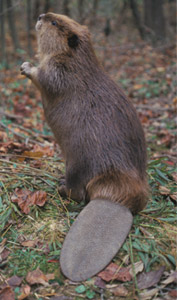 During the 1950s, the principal beaver range was the Kankakee River and Tippecanoe River drainage systems. Now, more than 8,000 miles of flowing water and thousands of acres of lakes and ponds in Indiana provide habitat for beavers.

Beavers have few predators except humans. Because they live in small, isolated colonies and are intolerant of newcomers, disease spread is not common and has little effect on population growth.

Beavers can start breeding at 2 years old, though most don’t reproduce until at least 3, especially females. Beavers generally mate in January or February and give birth 107 days later to 3 or 4 kits. Young are weaned between 6 weeks to 2-months old. Juveniles stay with their family groups through their second winter and help raise the next year’s kits. They disperse to find their own territory just before they turn 2. Beavers can disperse between 10 and 60 miles to find new territories. 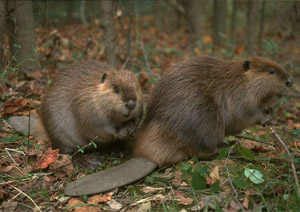 Regulated trapping is allowed for beaver during a restricted season. A few thousand beavers are removed annually by licensed trappers during the regulated season, which helps keep beaver populations healthy and addresses conflicts with beavers causing unwanted flooding. The owner or tenant of any property may take beaver discovered damaging property, without a permit, during the closed season. If property owners do not want to trap the beaver themselves, they can contact a licensed wild animal control operator. Relocation of beavers is challenging because beavers are very territorial and will attempt to kill another beaver they find within their territory. With beavers already living in the most suitable beaver habitat, relocation of beavers may not result in positive outcomes for the beavers. Additionally, relocation of beavers causing problems can only occur within the county of capture and onto land with the landowner's permission.

A beaver dam is not where a beaver lives. It is simply a mass of woody debris that may be able to be removed without a permit from the DNR, depending on its location and the equipment to be used. Get an outline of permit requirements. Be sure to obtain permission from the property owner(s) if the dam is on property other than your own. Beaver lodges, which are beaver homes, may only be removed with a nuisance wild animal control permit from the DNR.