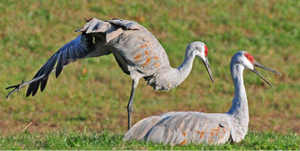 Sandhill Cranes (Antigone canadensis) are large-bodied birds with long necks, legs, and bills. They are a social species that will forage and roost in large numbers, especially during migration and winter. In the fall, you can often find them flying overhead with their distinctive bugling calls.

Sandhill Cranes migrate through Indiana and some breed in the state's northern counties. During migration, large flocks stopover at Goose Pond Fish & Wildlife Area and Jasper-Pulaski Fish & Wildlife Area. They can also be found foraging in agricultural fields during the day.

Sandhill Cranes usually nest in small, isolated wetlands or near the edge of larger wetland areas. They build their nest in vegetation such as cattails, sedges, burr reeds, bulrushes, or grasses. Nests may be 30 to 40 inches wide and 4 to 6 inches high.

They usually lay 1-3 eggs, once a year. The incubation period is 29-32 days. Eggs are pale brownish yellow to olive with brown or gray markings.

Sandhills are omnivores. They eat: 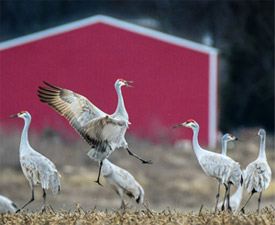 Indiana residents having conflicts with sandhill cranes can help the Indiana DNR collect information by using the wildlife complaint form. This form allows the DNR to track reports of conflicts for key species of interest such as sandhill cranes. This form will not submit a permit application on your behalf if you want to remove an animal causing a problem and it should not be used to submit sightings of cranes. DNR appreciates the support of Indiana residents to collect better information about wildlife conflicts. To inquire about options for removal, which are limited due to the state and federal protected status of sandhill cranes, contact your local district wildlife biologist.