The Northern bobwhite (Colinus virginianus) is one of the most widely distributed and hunted game birds in the United States. Bird watchers and naturalists also enjoy the sights and sounds of Northern bobwhites.

Northern bobwhites are a ground-dwelling species that only rely on flight on rare occasions. They rely on cryptic plumage color combinations and contrasts that provide excellent camouflage. They are minimally sexually dimorphic, meaning males and females have different physical characteristics. In the case of the Northern bobwhite, males have a white throat and chin, along with a white stripe above the eye extending to the back of the head. Those same areas on a female, are buffy brown in color. Underparts are tawny and white, blending with chestnut and gray. Each breast feather sports a black chevron. Upper parts of the shoulders, back, and rump, are a mixture of warm brown, cream, and shades of black. In Indiana, adult Northern bobwhites weigh an average of 180 grams (~6.5 ounces) and are about 10 inches long from bill tip to tail.

At the start of the breeding season males and females may pair; but, not always. Northern bobwhites are one of only a few bird species in the world using 3 different reproductive strategies. Males and females may pair, males may mate with multiple females, or females may mate with multiple males. Males usually build nests out of material from pine needles, dead leaves, and/or dead grass shoots. Females can lay 1 egg per day before beginning incubation. Clutch size, or the number of eggs per nest, usually averages around 12 eggs. Incubation usually lasts about 21 days. Interestingly, they are one of few species in the world in which males incubate nests and raise broods independently of a female. In the fall, Northern bobwhites form groups, or coveys, that average about 12 birds. Coveys usually will remain together until the following spring; however, small coveys will combine with each other. In the spring, coveys split up before breeding season. 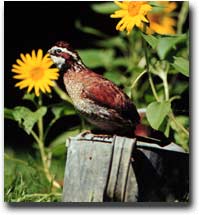 Northern bobwhites are gallinaceous birds, that is they dwell on the ground, scratch for their food. Weed and grass seeds, waste grain, flower parts, soft mast (fruits), and insects constitute their diet which varies with the season. Food habits vary considerably according to season and surrounding plant communities. Those living in heavily cultivated areas consume more waste grain, while those around woodland fringes take more seeds falling from vines, trees, and shrubs.  Northern bobwhites in arid climates will drink from standing pools of water; but, in Indiana they usually are able to get needed water from luscious broad-leaf forb leaves and probably dew.

Excellent Northern bobwhite habitat is a diverse assemblage of young plant communities. Northern bobwhites thrive in regularly disturbed environments. Usually, these plant communities need to be disturbed, at least, every 3-4 years. To do this, managers regularly use prescribed fire to promote young, healthy, high diversity plant communities providing adequate nesting, loafing, brooding, roosting, and escape cover. Shrubby woodland edges and fence rows, or waterways, can serve as escape cover from extreme weather and predators. While fallow fields and some agriculture practices may benefit Northern bobwhite at certain times of the year, populations have declined in areas dominated by agriculture, or where land has returned to mature timber.

Southeastern and southwestern Indiana provide the best Northern bobwhite populations in the state. South central Indiana is too heavily wooded, and central Indiana is intensely farmed. The Northern third of the state has always been marginal range because of exposure to extreme winter weather and annual snow accumulation limiting access to food.

Northern bobwhite are food for a host of different predators and other not-so-obvious species. For example, white-tailed deer have been documented eating Northern bobwhite eggs, as do raccoons, skunks, and snakes. However, habitat conditions have always been the number 1 factor limiting populations. The effects of displacement by urban sprawl, intensive agriculture, and lack of regular management throughout their range are the biggest concerns. Predators do not normally decimate populations if habitat quality and quantity are adequate.