Rob Carter was appointed Commissioner of Indiana Department of Correction by Governor Eric J. Holcomb on January 17, 2017. Prior to his appointment, Carter served as Executive Director of Statewide Security and Risk Management at Ivy Tech Community College since 2013. There, he was responsible for safety and security of the Nation's largest college, with over 100,000 students and staff at 40 plus campuses statewide. From 2005-2013, Carter served in the cabinet of Indiana Governor Mitch Daniels as Director of Indiana Department of Natural Resources (DNR). At DNR, he managed 1,541 full-time employees and oversaw the stewardship of 500,000 acres of natural land, state parks and forests to protect and preserve Indiana's natural, cultural, and recreational resources. Prior to working in State government, Carter was elected to two terms as Clay County Sheriff. Commissioner Carter has an Associate of Science Degree (AS) in Criminal Justice, Bachelor of Science Degree (BS) in Public Safety Management, and Master of Public Administration (MPA). Commissioner Carter has been happily married for over 29 years to his wife Kim. Together they have two children, son Kade and daughter Ellie. They also share their home with three dogs, Hank, Murray and Dolly.

Randy Koester is the Chief of Staff for the Indiana Department of Correction. In addition to directing the Department’s Legislative Affairs and Ethics Officers, Mr. Koester supervises the fiscal, human resources, construction services, research and technology, policies and procedures and payroll divisions. He started with the Department as a Staff Attorney in 1991, and since that time has worked as the Agency’s Legislative Liaison, General Legal Counsel, Director of Intergovernmental Relations, Executive Assistant to the Commissioner, Chief of Staff, Deputy Commissioner of Administration and Deputy Commissioner. He began his legal career as a clerk and became a staff attorney with the Indiana Supreme Court Disciplinary Commission. He also worked for three years as a Deputy Attorney General, serving in the Criminal Appeals and Government Litigation Divisions in the Attorney General’s Office. Randy has a Bachelor of Science Degree in Corporate and Investment Finance from Indiana University’s Kelly School of Business, and a Doctor of Jurisprudence from Indiana University School of Law.

Annie Goeller is Chief Communications Officer for the Department of Correction, whose role is to guide and direct internal and external communications to share information with the public and media related to IDOC facilities across the State of Indiana. Annie has a bachelor’s degree in journalism and started her career as a reporter and worked her way up to senior reporter and managing editor, covering news, feature, and everything in between. After more than 13 years in journalism, she moved into communications, serving as Communications Manager for the IUPUI Office of Community Engagement. In her role at IDOC, Annie strives to tell the story of the department and its facilities, along with their impacts on the communities they serve as significant employers, sites of education and workforce development for offenders before they return to the community, and valuable community resources.

Deputy Commissioner of Operations, James Basinger oversees the classification, adult operations, parole, and reentry facilities. Deputy Commissioner Basinger, a 27-year veteran with the Department, previously served as the Executive Director of Adult Operations. He began his career with the Indiana Department of Correction on December 21, 1991, at the Bloomington Work Release Center as a Correctional Officer. He was transferred to Wabash Correctional Facility (WVCF) in the summer of 1992. Mr. Basinger held various custody positions while at WVCF from Officer to Major, also serving as the Emergency Squad Commander for seven years. He has been a Firearms Instructor, CPR/First Aid Instructor, Training Officer and Staff Development Training Coordinator for WVCF. He's also a graduate of the first Emerging and Experience Leadership Program.  Mr. Basinger held the position as Major at the Putnamville Correctional Facility from 2000 to 2003. He was promoted to Deputy Warden in February 2009 at the WVCF then promoted to Warden in October 2009 at WVCF. In April 2009, Mr. Basinger retired as Command Sergeant Major with the 76th Brigade of the Indiana National Guard after 25 years of service, beginning as a United States Marine. He served two tours of duty in Iraq and a third tour of duty as the 76th Brigade's Rear Detachment Command Sergeant Major. Mr. Basinger has a bachelor's degree in Criminal Justice and A Master's Degree in Business Administration.

Deputy Commissioner of Diversity and Development

The Deputy Commissioner of Diversity and Development, this position is dedicated to improving equity and inclusion, she focuses on cultural, institutional, and systemic change to eliminate racism and discriminatory attitudes and behaviors throughout the Department of Correction. The Deputy Commissioner of Diversity and Development will work with both staff and the incarcerated population to promote inclusive, diverse environments throughout IDOC in which all feel safe and maintain a true sense of acceptance and belonging. They will assist in attracting, retaining, and promoting a diverse workforce. The DC will also provide guidance for IDOC specific programs and training curricula focused on equity and inclusion.

Deputy Commissioner of Administration and Finance

Christina Reagle serves as the Deputy Commissioner of Administration and Finance, overseeing the Finance, Construction Services, Data Analytics, and Technology Divisions. She began her career in state government in 2010 as an Accountant with the Department of Child Services.  Christina moved to the Department of Correction in September 2011, and has held the positions of Accounts Payable Manager, Financial Analyst, Deputy Controller, Controller, and Chief Financial Officer.  Prior to joining the state government, Ms. Reagle worked for JP Morgan Chase as an Assistant Branch Manager and spent several years as a Staff Accountant at a local CPA firm. Christina has served as a team leader and mentor for the Department’s Leadership Academy, a program that promotes self-awareness, self-assessment, and personal accountability to developing leaders from multiple state agencies.  She also serves as an instructor and mentor in the Department’s Women in Leadership training program, a program focused on assisting female staff develop their leadership skills, improve communication with others, and understand their importance in corrections. Ms. Reagle earned her bachelor’s degree from Indiana University Purdue University Indianapolis and her Master's of Business Administration from Indiana State University

Christine Blessinger serves as the Deputy Commissioner of Re-entry and Youth Services.  Chris oversees all areas of Re-entry to include case management, community corrections, education, DOL programs, HIRE team, religious services, Volunteers, and mentors. Chris also oversees the Division of Youth Services.  Chris began her career working for the Department of Correction in 2000 as a Psychiatric Social Service Specialist III at the Pendleton Juvenile Correctional Facility.  She served as a Program Director 2 and was promoted to Program Director 1 at Pendleton Juvenile Correctional Facility.  Chris was then promoted to Assistant Director of the Division of Youth Services in 2008, She was responsible for program implementation, Comprehensive Case Management, and re-entry services before being promoted to the Executive Director for the Division of Youth Services in 2015.  Chris is a member of the Council of Juvenile Justice Administrators where she is an Executive Board member and a member of the American Correctional Association (ACA).  Prior to working in corrections, Chris held positions of Youth Care Manager and Case Manager at the Henry County Youth Center.  Chris holds a Bachelor of Science degree in Criminology from Indiana State University. 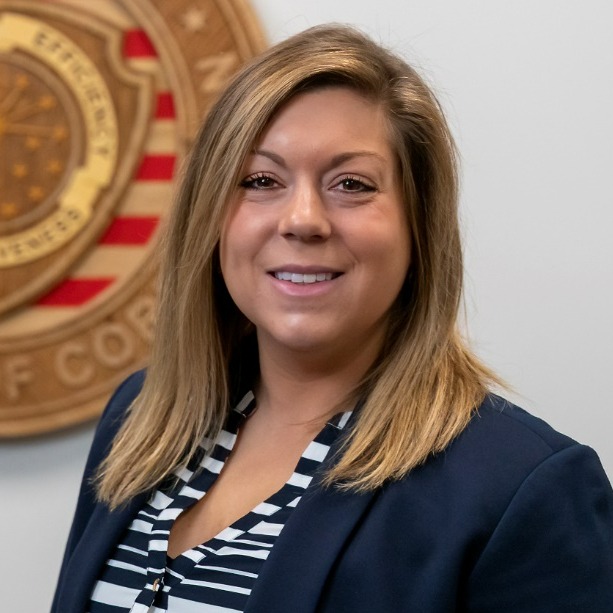 Anna Quick has been with the Indiana Department of Correction since July of 2019, most recently serving as the Deputy General Counsel of Operations. Anna has worked closely with facilities, acting as a liaison for the Attorney General’s office for federal litigation, habeas corpus petitions, and other discovery and subpoena needs. Anna has also served as an advisor for the Office of Investigations and Intelligence, Parole Services, PREA, and Behavioral Health. She is excited for this new chapter as Chief Legal Officer and has an excellent team of attorneys supporting IDOC staff. Prior to coming to IDOC, Anna served the state as a Marion County Deputy Prosecutor for 6 years. She is a graduate of the Maurer School of Law in Bloomington, and Loyola University in Chicago.

Dr. Kristen Dauss’ primary mission is to serve vulnerable Hoosiers by providing quality medical care to incarcerated individuals. Dr. Dauss’ experience includes working for the IDOC most recently as the Regional Psychiatry Director, while also providing direct patient care through the Division of Youth Services. Dr. Dauss holds a bachelor’s degree from Indiana University Bloomington and earned her medical degree from Morehouse School of Medicine in Atlanta, Ga. She completed triple board residency in general pediatrics, general psychiatry, and child adolescent psychiatry at Indiana University School of Medicine. Her experience allows Dr. Dauss the unique ability to examine systems of care and integrate physical and behavioral health needs to treat the whole person. Dr. Dauss also served as a staff physician at Fairbanks in Indianapolis, Ind., treating the physical and mental health needs of persons with substance use disorder. She also taught students at Indiana University School of Medicine and Community Health Network, where she is a volunteer faculty member.