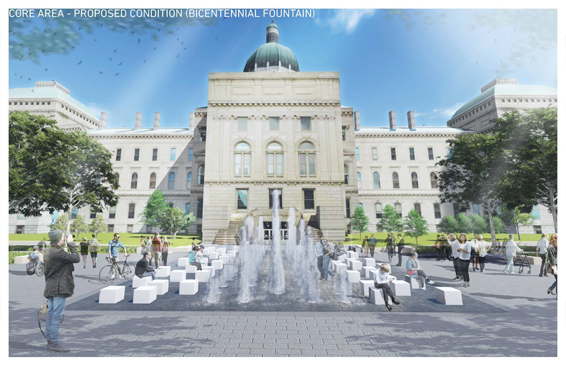 The Indiana Department of Administration is constructing an outdoor plaza to commemorate Indiana’s 200th anniversary of statehood.

The Bicentennial Plaza will be centered on the intersection of Senate Avenue and Robert D. Orr Plaza. The new Plaza creates a public space that can be used by government center employees, along with all citizens and visitors to Indiana. The design is intended to make the Plaza an engaging space that includes a water feature and two public art pieces, one representing elements of the Torch and another as  a figurative interpretation of a time capsule. The Bicentennial Plaza will be primarily a pedestrian space to be enjoyed year-round.

The Plaza creates a physical legacy of the State’s Bicentennial celebration and will serve to enhance the Statehouse and government center campus. Construction is scheduled to be complete in September 2016.

Beginning on or after Friday, January 29, 2016, changes will go into effect. At the start of traffic pattern transitions, ISP Capitol Police will have an officer stationed on Orr Plaza to assist with the closure and help with any traffic issues. Please read the below announcements for more information.

If you should have any additional questions, please email IDOA2016@idoa.in.gov