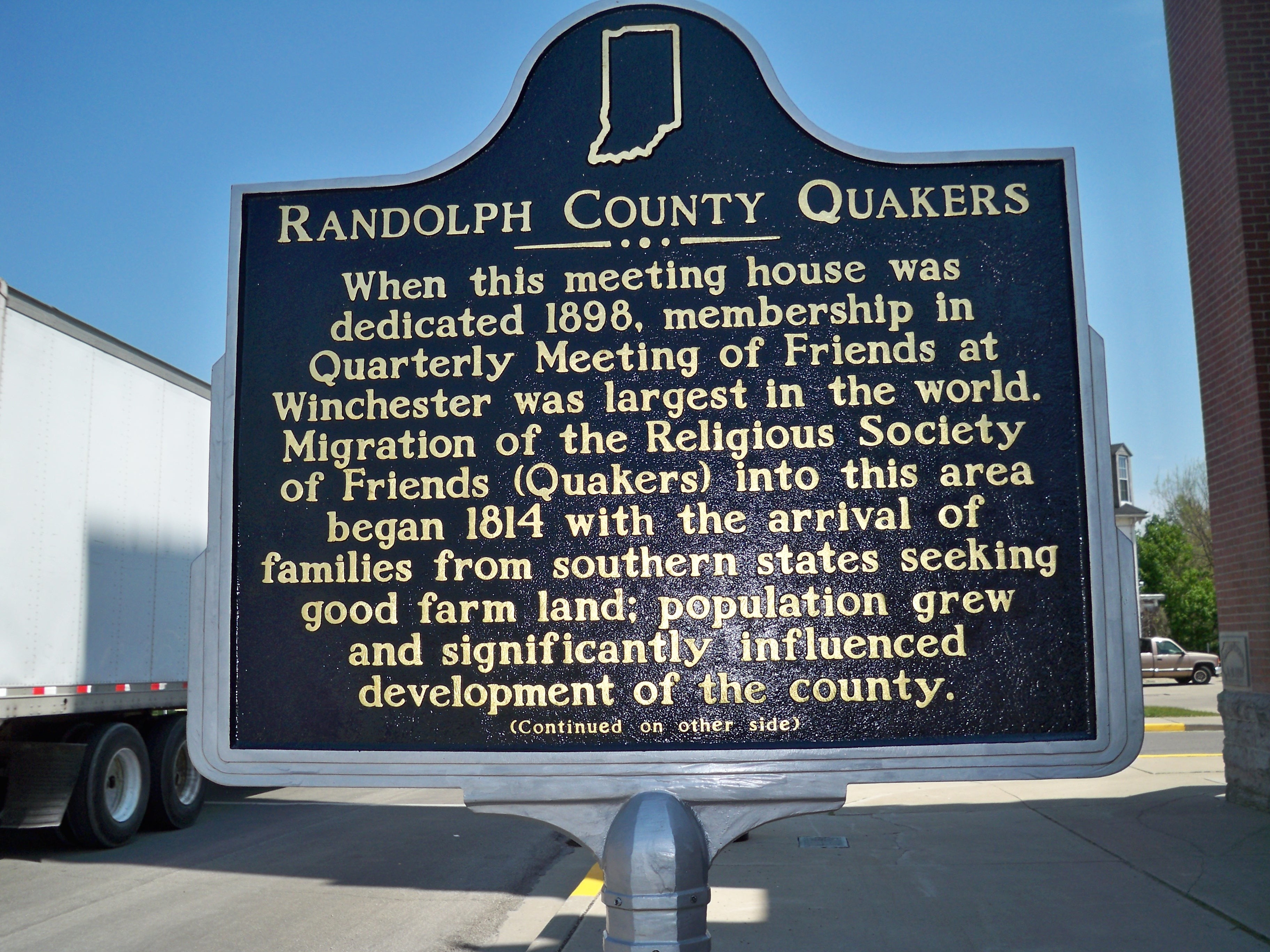 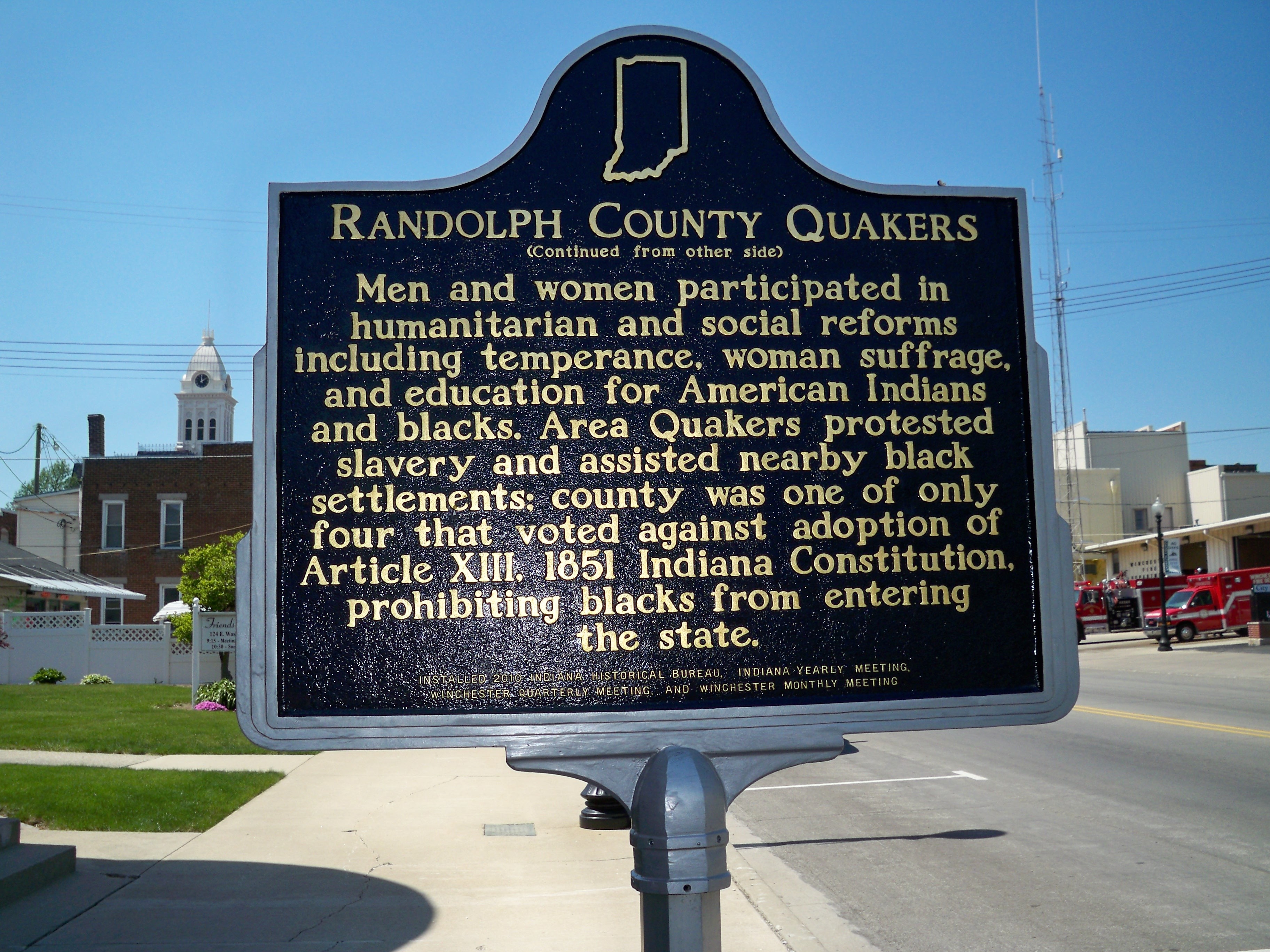 When this meeting house was dedicated 1898,1 membership in Quarterly Meeting of Friends at Winchester was largest in the world.2 Migration of the Religious Society of Friends (Quakers) into this area began 18143 with the arrival of families from southern states seeking good farm land;4 population grew and significantly influenced development of the county. 5

Men and women participated in humanitarian and social reforms including temperance,6 woman suffrage,7 and education for American Indians and blacks.8 Area Quakers protested slavery and assisted nearby black settlements;9 county was one of only four that voted against adoption of Article XIII, 1851 Indiana Constitution, prohibiting blacks from entering the state.10

**The research file for this marker contains many primary sources that were used to write the marker text, including meeting minutes (for the Winchester Preparative Meetings and the Indiana Yearly Meetings) and newspaper articles. IHB staff also relied heavily on records from the Friends Collection at Earlham College and secondary sources on the Society of Friends written by Thomas Hamm. Hamm is one of Indiana’s leading authorities on the Society of Friends and serves as the curator of the Friends Collection and director of Special Collections at Earlham, as well as a professor of history there. Copies of these sources are held by IHB and are open to the public.

Newspaper articles in the Winchester Journal in 1873 and 1874 show that the Society of Friends established and dedicated a meetinghouse in Winchester in December 1874. By February 1896, the Winchester Journal, reporting on the growth of the Friends’ Quarterly Meeting there, stated that the house was “filled to its utmost capacity” and “four persons were appointed to solicit means to be used in erecting a new house of worship…” The foundation for this new building was erected by October 1897, “on the same lot where the first building stood” and the building was dedicated in May 1898.

According to Tucker’s History of Randolph County, Indiana, “the first settlement in Randolph County was made in April, 1814, by … a Quaker family from North Carolina.” Tucker’s History includes land entries for 1814 and 1815, and provides the names of early settlers to the area. Listings in “Randolph County, Indiana, First Tract Book,” show some earlier purchases, but they agree that settlers began populating the area in 1814. In Past and Present of Randolph County, Indiana, Smith and Driver also use the 1814 date, stating that many “settled first in Wayne county, and then moved on over [to] what is now the southern boundary of Randolph county.” For general information on the immigration of southern Quakers to Indiana at the start of the nineteenth century see L.C. Rudolph’s Hoosier Faiths: A History of Indiana Churches & Religious Groups (Bloomington: Indiana University Press, 1995), 193-200.

Harlow Lindley writes that “the settlement of the Quakers in the Northwest was a part of the westward movement of population seeking more freedom or better economic opportunities.” Lee and Driver write that “these people being Quakers and religiously opposed to slavery had left the Carolinas because of that institution and came into the middle west to establish homes free from its pernicious influences.” Rudolph states that Quakers came to Indiana for “the cheap and fertile land” and because “there was a fundamental ordinance that slavery would be forever prohibited.”

According to the New York Times, by 1868 the Quakers “[had] converted what a few years ago was a howling wilderness into not only a land of promise, but a land of generous fulfillment…” Harlow Lindley agreed with this statement, writing in 1912 that “the Quakers have exerted an influence in the Old Northwest quite beyond what might have been expected of them as far as numbers are concerned.” Both Lindley and Rudolph detail reforms instituted by the Quakers in and around Randolph County, including their work towards abolition, prohibition, and their efforts in organizing schools (see side 2 of the marker for further information).

For more information on the development of Randolph County and the Quakers’ influence there see footnote 3 and E. Tucker’s History of Randolph County, Indiana, with Illustrations and Biographical Sketches of Some of its Prominent Men and Pioneers (Chicago: A.L. Kingman, 1882), 36-43.

Meeting minutes for the Friends make references to their temperance work. Writing in The Discipline of the Society of Friends of Indiana Yearly Meeting, the Quakers stated that “moderation and temperance are inseparable from the Christian religion” and that “we affectionately beseech our members to abstain from all appearance of evil in relation thereto. And particularly as respects the use of intoxicating liquors of every description.” Quoting Harlow Lindley, the “Bulletin of Friends’ Historical Society of Philadelphia,” stated that “while the opposition of Friends to human slavery led them to join their efforts in its overthrow, so later their stand as a temperate people caused them to identify themselves with all honest efforts in support of total abstinence from narcotics and intoxicants.” Going further, the “Bulletin” reported that “it is significant that all of our temperance legislation in Indiana has been championed by Friends…”

See the state historical marker and file for Amanda Way (add link) for more information on Quaker women working against the liquor traffic in Winchester during the 1854 Whisky Riot.

Records of the Indiana Woman’s Suffrage Association include information of the first statewide women’s rights convention organized by several Quaker women and the formation of the Indiana Women's Rights Association. The Friends Collection at Earlham College contains sources dealing with women’s rights, temperance, prison reform, and antislavery action. For more information on primary sources dealing with Quaker involvement in women’s rights and suffrage movements, see: Thomas D. Hamm, “The Friends Collection at Earlham College,” The Library Quarterly, 60, no. 2 (April, 1990): 139-149, accessed through www.jstor.org. Hamm describes the archives at Earlham College as housing “a number of diaries and hundreds of individual letters…that reflect Quaker … efforts for women’s and minority rights.” The collection also contains yearly meeting minutes and Quaker periodicals. The minutes begin in 1806 and include minutes of the Meeting for Sufferings which contain “petitions and statements on …woman’s suffrage.” See also the state historical marker and file for Amanda Way (add link). Born in Randolph County, Indiana, circa 1828 to a family of Quakers, Way became a speaker and activist involved in the woman’s rights movement.

According to Boone, Quakers accepted both sexes and all races to their schools and were recognized as public schools by the state as early as 1834. In 1846 Randolph County Quakers created the Union Literary Institute for African American students, male and female. In 1852 Quakers began managing White’s Indiana Manual Labor Institute as a boarding school for “poor children, white, colored, and Indian.” At the 1885 yearly meeting, the Friends “resolved to undertake more extended Indian educational work under Government contract.” The Friends and the Associated Executive Committee on Indian Affairs created a new school for American Indian students. Friends provided assistance to schools for African American students by raising funds, recruiting teachers, providing books, and supervising. However, African Americans in these communities were also highly involved in running these schools. According to Thornbrough, African Americans “played an important part in starting and maintain the schools, and the costs were borne principally from tuition paid by the pupils.” Teachers were both Quakers and, more often, black people from other faiths. Thornbrough states that “of the numerous colored schools in Wayne and Randolph counties almost nothing is known.”

According to Hamm, starting in the 18th century, Quakers stood at the vanguard of the anti-slavery movement and Indiana Quakers were no exception. Despite splits and offshoots, “Midwestern Quakers were remarkably consistent in their opposition to slavery and racial injustice in the nineteenth century.” Quakers in the Midwest did not segregate their schools, meetings, or graveyards. They spent time and money towards education and relief for African Americans. And they aided fugitive slaves and free people who had been kidnapped into slavery. They protested racist laws known as “black laws” and opposed exclusionary clauses of the 1851Indiana constitution (See footnote 10).

According to “‘A Great and Good People’ Midwestern Quakers and the Struggle Against Slavery,” the exclusion provision, which prevented African Americans from settling in the state following the adoption of the 1851 Constitution, passed with 84% approval in Indiana. Only four counties rejected the clause: Steuben, Lagrange, Elkhart, and Randolph. The article makes it clear that not all Quakers opposed the clause, but it shows that “levels of opposition were significantly higher in the Quaker counties than in the state generally.”