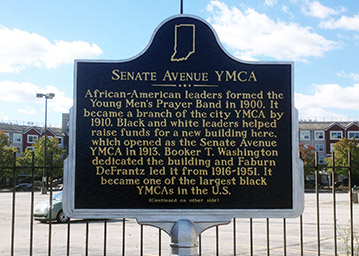 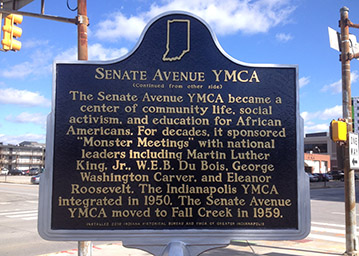 Visit the Indiana History Blog or

listen to the Talking Hoosier History podcast to learn more about the Senate Avenue YMCA.

African-American leaders formed the Young Men’s Prayer Band in 1900. It became a branch of the city YMCA by 1910. Black and white leaders helped raise funds for a new building here, which opened as the Senate Avenue YMCA in 1913. Booker T. Washington dedicated the building and Faburn DeFrantz led it from 1916-1951. It became one of the largest black YMCAs in the U.S.

According to historian Emma Lou Thornbrough, in late nineteenth century Indianapolis, African Americans were not officially barred from the city’s YMCA, but no blacks had been admitted. In 1888, after two or three African Americans were denied admittance, some members proposed an amendment officially barring blacks.  The amendment was tabled with understanding that very few blacks would be admitted.

In her book, Light in the Darkness, Nina Mjagkij, states that in the U.S., African Americans were generally excluded from ‘white’ branches of the YMCA but that they were also encouraged to form their own separate associations as part of the YMCA. According to George Mercer, two African American doctors in Indianapolis, H. L. Hummons and Dan H. Brown, took the first steps toward establishing their own YMCA in 1900.

The Indianapolis News, March 31, 1902, and the Indianapolis Recorder, April 15, 1902, both reported that the Young Mens’ Prayer Band “was merged into a colored Y.M.C.A.” International Secretary of the Y.M.C.A., J.E. Moreland was present at the meeting at Flanner Guild, March 30.The 33rd Annual Report (1903) of the Indiana Young Men’s Christian Association lists YMCA associations and dates of organization in Indiana cities through October 31, 1902. An “Indianapolis (col’r’d)” organization was established in 1902 with a total of 115 members.

By 1911, the Indianapolis “colored” YMCA had outgrown its building located at California and North streets. At a joint meeting, June 27, 1911, of the Central YMCA association, the trustees and directors announced a $25,000 grant from Julius Rosenwald of Chicago to the Indianapolis YMCA for a building “to be devoted exclusively to the negroes of this city, provided the local association can raise $75,000 for a building fund.”

The Indianapolis News, November 3, 1911, reported “J. E. Moorland, international colored YMCA secretary. . . . declared that Indianapolis had accomplished something that no other city had even attempted—the raising of a large fund directly for a colored Y.M.C.A.”

On July 28, 1912, “more than 5000 colored persons” attended the groundbreaking for the $100,000 new building located at the southwest corner of Senate Avenue and Michigan Street. On Sunday, October 20, 1912, the cornerstone of the new building was laid “with appropriate ceremony in the presence of several thousand persons.” Julius Rosenwald sent a telegram: “the chief significance of this ceremony is that the cornerstone they are laying today rests on the foundation of a more friendly mutual understanding between the two races.”

The success of the “colored” YMCA in Indianapolis, and the obvious need for a new, larger building is confirmed in the Indianapolis News, November 30, 1912: “Indianapolis now has the largest branch of the colored Y.M.C.A. in the country, there being 505 men enrolled here.”

A week of ceremonies and festivities were held to dedicate the new Senate Avenue Y. The activities began July 6, 1913 with a public inspection of the new facility. On Monday, “Citizen’s Night,” the building was again crowded with citizens listening to the live music of Indianapolis jazz musician, Noble Sissle.

On the evening of Tuesday, July 8, Indianapolis businessman John N. Carey presided over the formal dedication ceremony during which George L. Knox, president of the “colored men’s branch” of the Y accepted the keys to the new building.

The principal speaker at the dedication, Booker T. Washington, one of the foremost African American leaders, was introduced by former U.S. vice-president and Indiana resident, Charles W. Fairbanks. Washington’s remarks, as quoted in the July 12, 1913 Indianapolis World, began with accolades:

In the city of Indianapolis there are about 35,000 colored persons. Many of these have recently come here. Many are classed as ‘floaters.’ The problem which is presented by so many of our race coming into a large city like this within so short a time is a serious one. This building is to help solve this problem.

The completion of this building should mean less idleness on the part of black people in Indianapolis. It should mean less crime, less drink, less gambling, less association with bad characters. . . . Through this building every discouraged young man should be reached and a new ambition and friendly courage put into him.

At the close of the dedication ceremonies, the “Colored Men’s Good Citizens League” held a banquet in honor of Washington. Thursday night was ladies’ night, “This was particularly significant because of the fact that Madam Walker is the largest paid up subscriber among the colored people. . . . Dr. Washington was her guest while in the city.”

At the time of the dedication of the new Senate Avenue YMCA, the Indianapolis World, July 12, 1913 listed staff for the new building—among them was Faburn E. DeFrantz, the Y’s new physical director. In 1916, DeFrantz became the Executive Secretary of the Senate Avenue YMCA. For the next thirty-five years, he worked to make this segregated YMCA responsive to the educational, recreational, and social needs of the African American community in Indianapolis.

In 1933, the Indianapolis Recorder reported DeFrantz’ “determination to keep the local branch in the honor position as the colored Y.M.C.A. having the largest membership in the U.S. A.” DeFrantz was well-known across the country not only for membership development but also for his involvement in community efforts to eradicate discrimination and provide opportunities for African American boys and young men.

According to historian Richard Pierce, DeFrantz developed the Sunday afternoon “Monster Meeting” into a nationally recognized public forum where local, state, and national leaders addressed issues of the day. Pierce described the Senate Avenue YMCA as “the most significant branch in the country.” In addition to its large membership, this was “because the Y actively pursued political education, because it served as an agent for city-wide desegregation efforts, and because it had Faburn DeFrantz, a leader who believed that the YMCA could be a vanguard for change in the city and state.”

DeFrantz played a crucial role in desegregating Big 10 college basketball in 1946 and 1947. When DeFrantz retired in 1951, the Indianapolis Recorder described him as “an enterprising and inspiring leader of young men. . . . Men aided or inspired by the man, DeFrantz, are now scattered to the four winds and found in almost all walks of life.” For more information about IU and Big 10 basketball, see Indiana Historical marker for Bill Garrett.

Note: A portion of DeFrantz’ memoir is published in the June 2012 issue of the Indiana Magazine of History, “To Kathy and to David”: The Memoir of Faburn E. DeFrantz.”

Historian Nina Mjagkij states: “The tremendous growth of black YMCA work at the turn of the century was largely the product of the increasing migration of African Americans from the countryside to the cities.” This migration included African Americans leaving southern cities and plantations “searching for employment and educational opportunities as well as a less racially oppressive environment.”

Authors Mjagkij and Spratt remind readers that the YMCA in the U.S. remained segregated until 1946. Even so, the black YMCAs “played a crucial role in the struggle for racial advancement. . . . [they] launched programs that fostered self-respect and self-reliance and tried to provide young men with proper role models and male companionship. . . . [they] served as sanctuaries which preserved African American masculinity and prepared black men and boys for their leadership role in the struggle for equality that lay ahead.”

In segregated Indianapolis in 1913, author George Mercer states that: “The colored community had assumed the responsibility for its own recreation and charity work, with some assistance from the Whites.” This same community established the “colored” YMCA” and developed its programs and services to benefit the ever-increasing African American population of Indianapolis.

By 1924, the NAACP magazine, The Crisis, reported that the Indianapolis black YMCA had worked hard in their “attempt to engender a better racial feeling between the citizenry.” Still self-supported, the Senate Avenue Y raised their entire 1923 budget except for a small Community Chest donation. Also, the Boys’ Division of the Y had raised funds to provide over 700 memberships to those who could not afford to join. The article concluded by stating that the “greatest benefit is the part played by the organization in building up a racial consciousness of ability to achieve and administer large enterprises and the subsequent strengthening of mutual confidence.”

According to the 1954 Indianapolis Star Magazine, Thomas E. Taylor, executive secretary of the “colored department” of the Indianapolis YMCA, established the “Monster Meeting” public forum in 1904. Originally the meetings were very religious in nature but when Faburn DeFrantz took over direction of the Senate Avenue Y in 1916, he expanded the meetings to include “free discussion of all subjects of human interest” and to offer opportunities for black youth “to see and hear social leaders from an inspiration standpoint.”

Historian Richard Pierce states that the Indianapolis Senate Avenue YMCA “became known nationally for the Sunday afternoon meetings [the Monster Meetings] in which dignitaries, politicians, and scholars—local, regional, and national—took to the stage to inform interested and large audiences of the issues of the day. . . . The Monster Meetings were the focal point for protest and constituent education in Indianapolis, but the impact of those who were educated on those Sunday afternoons was felt throughout the state.”

For a more complete list of speakers and dates, see Warren, “The Monster Meetings,” 66-80.

At the 45th International Convention of the Young Men’s Christian Associations of North America in 1946, the National YMCA adopted “a recommendation to abandon all racial bars in religious, social and athletic activities” and called on its local associations to desegregate.

With over 5,000 members in 1950, the Senate Avenue YMCA building was bursting at its seams. The September 13, 1952 Indianapolis Recorder reported that discussion was underway for replacing the Senate Avenue Y with a new, modern building. A fund drive to raise $1.5 million was announced in January 1953; $690,000 would be allocated to a new Senate Avenue YMCA.

The Recorder (November 1955) reported that the new YMCA would be constructed at West 10th St. at Fall Creek Parkway and Indiana Avenue; projected costs had increased to $950,000. At the groundbreaking ceremony held in April 1958, the Recorder reported that the Fall Creek YMCA represents: “The ideal of finer young manhood shared by Indianapolis people without regard for race, color or creed.”

When the new Fall Creek YMCA was dedicated, September 13, 1959, it was “hailed as a tribute to Executive Secretary John J. James . . . and to the Indianapolis public whose faith, work and money made the project possible.” This new facility “has made up its mind to cross the color line in the dormitory, the swimming pool and everywhere,” reported by the Recorder, September 19, 1959.

Forty years later, the Fall Creek YMCA was fighting to stay open. Fewer adult memberships and migration of nearby population away from the inner city resulted in growing annual budget deficits. The Indianapolis Recorder reported in March 2001 that the 2000 Census showed two-thirds of the city’s African American population living outside of Center Township. In June 2003, the Metropolitan Board of the Indianapolis YMCA passed a resolution to close the Fall Creek YMCA on September 30, 2003. The Indianapolis Star reported, October 1, 2003, “Fall Creek YMCA closes, symbolic of a changing city.” The article cited construction of Interstate 65 and the expansion of the IUPUI campus as additional factors in the Y’s declining membership.