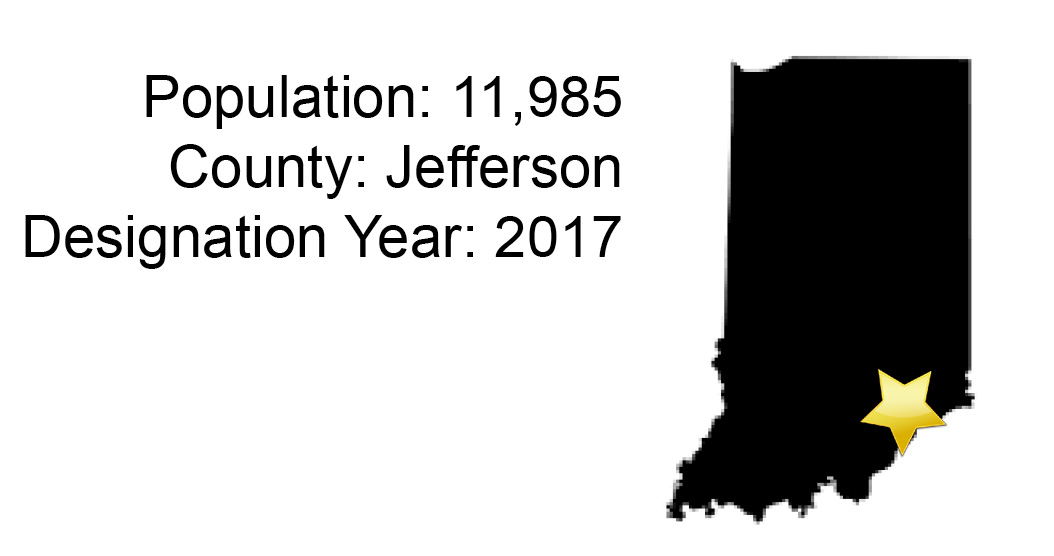 Madison’s proximity to a college campus, the Ohio River and their nationally recognized historical downtown placed them in a position for maximum development in the wake of receiving the Stellar designation in 2017. Previous to this award, Madison was named a finalist for America’s Best Communities, a contest put on by Frontier Communications, and received $150,000. Primarily, this money went towards funding elements of their comprehensive plan which, in turn, provided a springboard for their Stellar plans.

As long as Stellar has existed, Madison has been preparing for their application. North Vernon, one of the first Stellar designees, was one of Madison’s neighbors and inspired them to consider Stellar for their community. However, they realized that in order to compete for this award, they first had to take several steps to justify a viable application. According to Damon Welch, Madison’s mayor, a key ingredient was to first update and improve the comprehensive plan.

For their Stellar application, they focused on creating “one Madison.” Geographically a hill separates the city. The southern end is made up of the downtown and river front areas while the hill top has industries and shopping centers. While both are critical to Madison’s health, the Stellar committee recognized that there was a divide between the two areas and wanted to create avenues for connection.

“I think the vision for ‘one Madison’ is not just physical, but it’s in the eyes of the residents as well,” Andrew Forrester, Madison’s community development manager, said. “‘One Madison’ will see the community not as two different or competing areas, but as one community with distinct neighborhoods and attributes. Although a physical barrier will always be there, the vision is to eliminate the mental barrier.”

This vision was determined by the Stellar planning committee after hearing from the community. In order to capture their perceptions and experiences, surveys were sent out through a variety of means.

“The purpose of the surveys was to get as much feedback from the community as possible,” Nicole Schell, Madison’s city planner-preservation coordinator, said. “They are a great way to get people who cannot make a meeting or who don’t like to speak up in public involved.”

Leading up to Stellar, there was a high level of community engagement and support. In 2017, Madison was named a finalist in the America’s Best Community (ABC) contest. The local and national attention that this contest brought Madison carried momentum that naturally flowed into their Stellar designation.

“ABC helped us hone in on the projects that we needed to do,” Welch said. “A lot of the projects that we’re already starting on are a result of that, but will help us transition into Stellar.” Besides funding, Stellar and ABC both created a new interest in Madison. Already, developers are reaching out and looking for ways that they can become invested. For Forrester, this came as a surprise. “It really does legitimize the work that we’ve been doing the past several years,” Forrester said. “People view us as someone they want to work with now.”

Although the attention from organizations outside of the community have been encouraging to the Stellar team, the focus is also on their local stakeholders. In the surveys, a lack of communication between the city and businesses was cited as an issue. To address this, the city is working on creating a stronger relationship with the chamber of commerce.

Additionally, according to Welch, the city currently has several opportunities. Plans are underway for reworking Indiana’s approach to the new Milton-Madison Bridge that runs over the Ohio River, connecting Indiana and Kentucky. Ideally, this new approach will improve traffic flow and provide a beautiful gateway into not only Madison but Indiana.

“We believe we’re poised to provide the quality of life that Stellar advocates for,” Welch said.

For Madison, Stellar has just begun. They will receive access to state dollars in 2017. Already Stellar has left an impact on the community. As a forward looking community, the Stellar committee is looking forward to completing projects as quickly as possible. “The greatest outcome that Stellar has brought is an emphasis on planning and implementation,” Schell said. “Stellar has ensured that our plan doesn’t just sit on a shelf and collect dust.”

To follow their progress, read their latest quarterly report here.