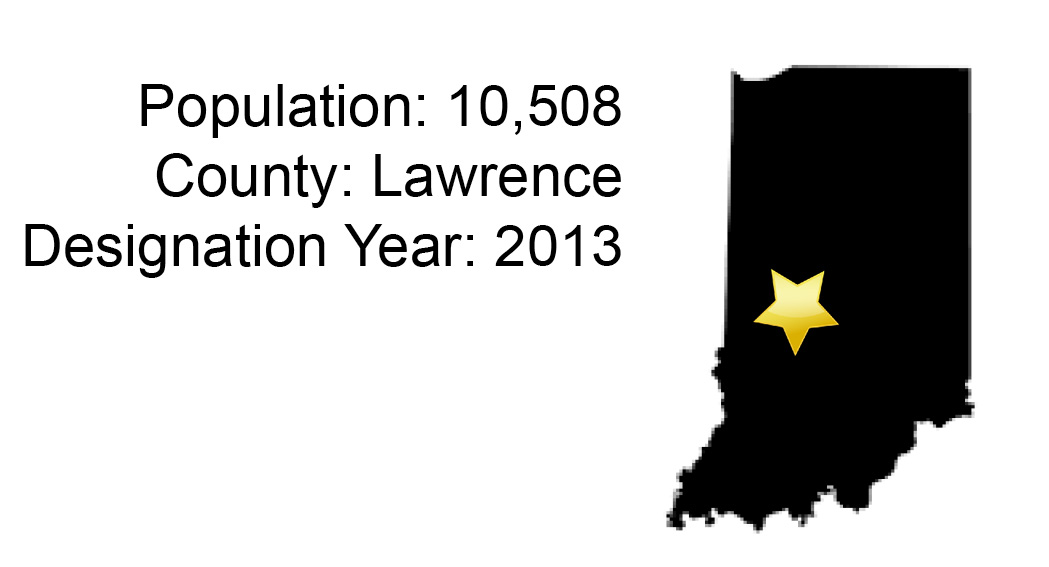 Despite having less than 14,000 individuals reside in their community, Bedford made a large impact at a local and statewide level in the years surrounding their Stellar designation in 2013. In that same year, they became the Indiana Chamber of Commerce’s Community of the Year. However, the foundation for these accomplishments was established before Stellar existed. Bedford Mayor, Shawna Girgis, pursued an OCRA funded comprehensive plan early in her first term and began looking to implement that plan as efficiently as possible. After being named a finalist in 2011, Bedford continued to pursue projects they had identified and began developing a downtown plan. Additionally, they focused on learning more about the federal grant process and aligning their next Stellar application with these standards.

Before Shawna Girgis took office as the Mayor of Bedford, she was looking to work along side of OCRA to improve rural communities throughout Indiana. As mayor, she was granted funding for an updated comprehensive plan.

Like most comprehensive plans, Bedford’s had a large area of focus and an ambitious collection of projects that were included on their first Stellar application in 2011. With this wide scope in mind, Bedford’s first application covered a large geographical area which didn’t receive funding. In 2012, Bedford applied again but were not selected as a finalist.

Regardless of this setback, Bedford was committed to seeing changes in their community and learned from previous experiences. After closer examination, they recognized the distinguishing factors in projects that encourage or discourage the designation of state funds.

“We wanted to match our comprehensive plan projects with the State of Indiana’s funding agencies,” Marla Jones, Bedford’s business and community director, said.

These modifications, paired with a narrower geographical footprint, played a role in Bedford’s 2013 designation. However, what set Bedford apart was their commitment to meeting the needs of their community.

At the time, local businesses were struggling to stay open. The culture of the downtown wasn’t conducive to attracting new investments. In general, quality of life was declining and population retention was dipping.

After accepting the Stellar designation, the Stellar planning team quickly determined that, to succeed and ensure that projects were meeting the needs of the community, they needed to get residents involved.

“Once we had communicated our vision, demonstrated our commitment and conveyed our goals and objectives to the community and local stakeholders, they became enthusiastic and engaged in the process,” Jones said.  “Citizen participation the strategic planning process for both the city and downtown comprehensive plans were key to their success.”

Beyond community input, Girgis said citizens’ willingness to collaborate contributed to Bedford’s successes. “The ability and willingness of our community to come together and work towards this with us is priceless,” Girgis said. “You can’t put a value on people coming together to work toward a common goal.”

This carried an additional value as the projects progressed because, as they came closer to implementation, they required even more attention. According to Girgis, assigning one individual whose sole responsibility is to monitor Stellar projects was critical. In general, the work load was much greater than anticipated, even with this extra assistance. Unforeseen issues arose that complicated project details. However, many of these potential issues were caught early due to the standards that Stellar has in place.

“In the planning phase especially, it’s so much more work than any other federally funded application,” Girgis said. “But this helped us be more prepared for implementation.”

As of 2018, Bedford is a few steps away from completing their Stellar projects. Throughout the process the city has been able to redefine who they are and what they want to become.

“If you were downtown 50 years ago, it was the center of commerce and the heart of the community. 20 years later it was struggling. Now, we’re working to increase commerce and improve downtown as a gathering place, public space and heart of our community,” Jones said.

Beyond their local impact, the city has attracted the attention of the greater community as well as the state. In 2017, Bedford was named an Indiana Bicentennial Community by the Indiana Chamber of Commerce.

Kevin Brinegar, the Indiana Chamber President, in an interview with the Indiana Business Journal said, “The City of Bedford was selected because it was a good example of how true teamwork can improve the quality of living and the business climate in a city of any size.”

But, Bedford isn’t stopping. “If you’re moving a community forward, you’ll never be done,” Girgis said. “Stellar helped us move forward quickly, but we still have so much more to do.”

By April, the last of Bedford’s most ambitious Stellar Communities projects should be complete.

Since Bedford was named a Stellar city in 2013 and began project planning in 2014, it has moved an historic train depot, built an apartment building for seniors, razed a downtown building and built in its place StoneGate Arts & Education Center, constructed a new streetscape design downtown and completed a trail connector from the Milwaukee Trail to downtown.

The city received an initial investment of $19.8 million from the state, primarily from the Indiana Office of Community and Rural Affairs, Indiana Department of Transportation and Indiana Housing and Community Development Authority.

The work that went into being named a Stellar Community was just the beginning.

Looking back, Mayor Shawna Girgis said planning and completing the projects was more challenging than city planners had envisioned, “But with that being said, the end result is more than I envisioned as well.”

“People ask me all the time, ‘Was it worth it?’ and I say definitely yes. It was good for the community and we would have been remiss if we had not tried.”

Being a Stellar Community has done more for Bedford than just inject millions of dollars. It has served as a springboard to other opportunities.

When the Indiana University Center for Rural Engagement was looking for a city to launch its Sustaining Hoosier Communities initiative, it reached out to Lawrence County.

But it was Bedford’s Stellar designation and also its selection as Community of the Year by the Indiana Chamber of Commerce that raised its profile.

“Being chosen by IU to serve as the pilot county was the direct result of the Stellar and IU seeing Bedford as a true rural community but also an up and coming community,” Girgis said.