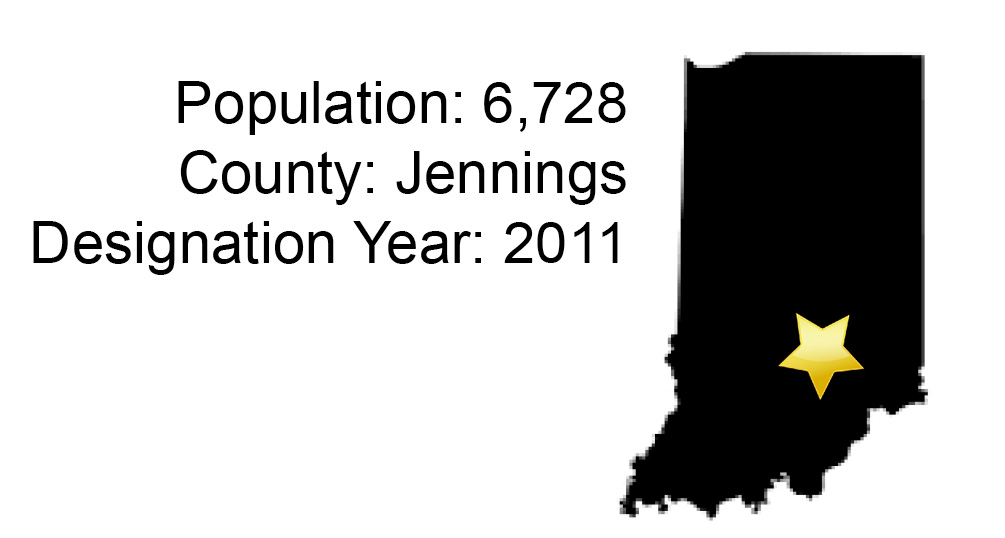 North Vernon was awarded the Stellar designation in 2011 at a critical point in their community’s history. In 2005, a large urban training center for civilian and military organizations was built, bringing over five thousand people into North Vernon every year. This influx of people also brought a new dynamic mix to the community and increased the need for housing and entertainment downtown. Additionally, at the point of designation, North Vernon was anticipating the construction of a new bypass. This would increase general traffic in the community and provide a key opportunity for local businesses. Going into the application process, North Vernon created a comprehensive plan (according to the 2011 Stellar standards) and put together a Stellar team that utilized local individuals as well as engineering, planning and grant writing firms.

Kathy Ertel, the executive director of the Jennings County Economic Development Commission (JCEDC) was a part of the process from the beginning. From day one, her organization was on board with the city of North Vernon to pursue Stellar. Heading into an election year, North Vernon’s mayor and city council appointed JCEDC to oversee the application process. If they were granted the designation, this would ensure continuity over the following years.

Before North Vernon was designated, the city took several steps to ensure that their community was Stellar ready including hiring regional grant writers. In 2011, the grant process for Stellar did not require communities to complete an SIP. However, in preparation, North Vernon put together a comprehensive plan for their city outlining the different projects that they would complete with Stellar dollars.

The North Vernon Stellar team hired Hannum, Wagle and Cline Engineering and Strategic Development Group to assist them throughout the planning in Phase I.

“We were meeting up to two times per week. Going in, we didn’t realize that we had to go through the application process again with other agencies so it took a little more time than we expected to get started,” Ertel said.

North Vernon also had to accommodate personnel changes within the government agencies that they were working with. Some of the projects were rushed because they had to be completed before they were handed over to another individual. This complicated the community’s project timeline.

In general, Ertel said that the Stellar committee’s biggest surprise was low long it took to see results. A downtown fire in 2014 compounded the issue and set several of the downtown façade projects behind schedule.

“There was just an insane amount of construction in our little downtown for close to five years,” Ertel said.

Another issue North Vernon encountered was as the first Stellar designee was the lack of public understanding of what the program actually was.

“Many people thought we had just received a check book for and didn’t understand why we couldn’t change our plans very easily,” Ertel said. “Certain funding could only be used in specific areas.”

Between 2011 and 2016, more than 200 public meetings were held to provide Stellar updates. Regardless, the Stellar team found it difficult to communicate everything during these meetings. Attendees were often inconsistent and it was difficult for them to be caught up to speed on current projects.

“My biggest piece of advice to any Stellar community is that even if you think you’re communicating enough, communicate more,” Ertel said.

Since Stellar wrapped up in 2016, North Vernon has had to intentionally reevaluate their goals. Recently, they completed a community needs assessment to determine what those next steps should be. Currently, they are working on building a park with an amphitheater and workout equipment only two blocks away from Muscatatuck Trail, one of the Stellar-funded projects.
“I’d do it again in a heartbeat. I feel lucky to have been a part of it,” Ertel said.

Ertel says that Stellar has given the community a sense of pride. Since the downtown’s revitalization, she’s noticed an increased investment from property owners in their downtown businesses and residencies. “What’s happening now was built off of Stellar.”