Contrast Markings to Give Interstate Segments a New Look

Beginning with July 2022 project lettings, black markings will be used in combination with the white or yellow markings at some freeway system interchanges or freeway segments with eight or more continuous lanes. The alternating black and white or black and yellow markings will provide improved contrast with the concrete and enhance safety. The update is not retroactive and is effective for only this type of situation.

The I-69 Finish Line segment north of Southport Road in Marion County, which will feature eight lanes and a system interchange with I-465, will include contrast markings for edge and lane lines.

The markings aren’t painted. They are wet reflective preformed plastic markings that are grooved into the pavement.

“These type of contrast markings, especially on new concrete pavement, are highly visible at night and during wet conditions, making it safer for both motorists and vehicles with automated lane-keeping features,” said Senior Engineer of Signals & Markings Joe Bruno. 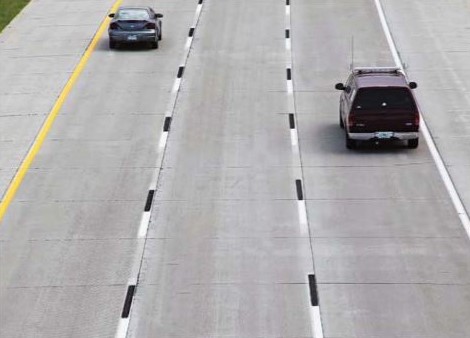