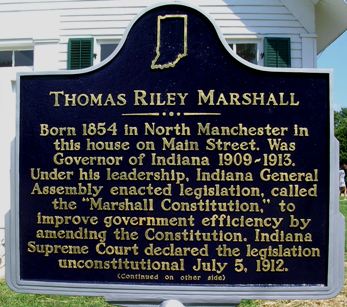 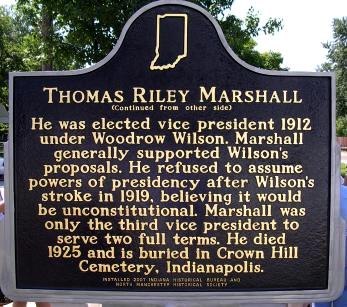 Born 1854 in North Manchester in this house on Main Street. Was Governor of Indiana 1909-1913. Under his leadership, Indiana General Assembly enacted legislation, called the "Marshall Constitution, " to improve government efficiency by amending the Constitution. Indiana Supreme Court declared the legislation unconstitutional July 5, 1912.

He was elected vice president 1912 under Woodrow Wilson. Marshall generally supported Wilson's proposals. He refused to assume powers of presidency after Wilson's stroke in 1919, believing it would be unconstitutional. Marshall was only the third vice president to serve two full terms. He died 1925 and is buried in Crown Hill Cemetery, Indianapolis.

Born 1854 in North Manchester (1) in this house on Main Street. (2) Was Governor of Indiana 1909-1913. (3) Under his leadership, Indiana General Assembly enacted legislation, called the "Marshall Constitution, " to improve government efficiency by amending the Constitution. (4) Indiana Supreme Court declared the legislation unconstitutional July 5, 1912. (5)

He was elected vice president 1912 under Woodrow Wilson. (6) Marshall generally supported Wilson's proposals. (7) He refused to assume powers of presidency after Wilson's stroke in 1919, believing it would be unconstitutional. (8) Marshall was only the third vice president to serve two full terms. (9) He died 1925 (10) and is buried in Crown Hill Cemetery, Indianapolis. (11)

(3) Marshall received the nomination from the Democratic Party in the 1908 gubernatorial race as a compromise candidate, and won the popular election. Clifton J. Phillips, Indiana in Transition: The Emergence of an Industrial Commonwealth, 1880-1920 (Indianapolis, 1968), 101-6 (B050192).

Marshall's involvement in politics prior to his 1908 gubernatorial campaign included a bid for prosecuting attorney for the 33rd judicial circuit in 1880 (which he lost to a Republican challenger), service as chairman of the Democratic Party's twelfth district committee, and service as a member of the Democratic State Central Committee starting in 1896. Jehs, "Thomas R. Marshall, " 223 (B050191) and Harstad, "Thomas R. Marshall, " 234-35 (B050386).

According to Phillips, with the help of his advisers, he drew up an instrument which greatly simplified the procedure of amendment and embodied such other changes as restricting the right to vote to literate male citizens of the United States who were registered in the state and had paid a poll tax for two years. The proposed constitution also would have permitted the enlargement of the House of Representatives and extension of the regular session of the legislature from sixty to one hundred days, as well as specifically authorizing it to enact legislation providing for the initiative, referendum, and recall, workmen's compensation, lawyers' qualifications, and municipal home rule. Under it the Supreme Court would have been increased from five to eleven members, and the governor's powers expanded by the item veto in appropriation bills and by requiring a three-fifths majority vote in the General Assembly to override his veto. Indiana in Transition, 111 (B050192).

According to Kettleborough, some major proposed changes included: [1] Authorizing the General Assembly to enact a compulsory workman's compensation act; [2] empowering the State, in case of necessity, to take personal property without first assessing and tendering compensation; [3] prescribing as qualifications for voters a residence of twelve months in the State, the payment of a poll tax for a period of two years and, after November 1, 1913, the ability to read English or some other known language; [4] depriving citizens of a legal residence in the State who had been absent therefrom for a period of twelve months, unless a declaration of intention was filed with the clerk of the circuit court; [5] increasing the membership of the House to 130 members, and guaranteeing each county at least one representative and an additional representative for each quota in excess of the necessary population representing a quota; [6] limiting the apportionment of senators to once in ten years; [7] increasing the length of the regular sessions of the General Assembly to 100 days, and decreasing the length of special sessions to 30 days, and providing that only such business might be transacted at a special session as the Governor should specify in his proclamation; [9] empowering the General Assembly to grant special charters to the cities of the State; [10] requiring a three-fifths majority to pass a bill over the Governor's veto; [11] authorizing the Governor to veto items and clauses in an appropriation bill; [14] providing that the Supreme Court should consist of not less than five nor more than eleven judges; [16] authorizing the General Assembly to adopt laws providing for the initiative, the referendum and the recall of all State and local officers except judges; [17] empowering the General Assembly to prescribe the qualifications of persons admitted to the practice of law; [21] prohibiting an increase in the salary or emoluments of any public officer for the term for which he was elected. Kettleborough, Constitution Making, 387-88 (B050388).

The following explanation of the unconstitutionality of the Marshall Constitution was reprinted in Kettleborough from Ellingham v. Dye ”Marshall Constitution Case (July 5, 1912): The underlying question involved was whether chapter 118 of the acts of 1911 was a valid exercise of legislative power. The friends of the measure contended that the act involved the submission to the electors of a 'new constitution' for adoption or rejection; and that the General Assembly has the power, involved in the general grant of legislative power, to initiate, draft and submit a new constitution to the people in such form and manner as to enable them to adopt it as the organic law of the State. The opponents of the measure contended that the power to initiate, frame and submit to the people fundamental law is not legislative power in the sense in which the General Assembly is vested with legislative power; that the act in question was not a new constitution but merely proposed amendments of the existing Constitution'; hence these amendments could be submitted to the people only in the manner prescribed by Article 16 of the Constitution, namely, after having been adopted by two succeeding General Assemblies. Kettleborough, Constitution Making, 453-54 (B050388).

The court in its conclusions held that:

[1] The legislative power granted by the Constitution is the power to make, alter, and repeal laws, ' and not to draft new constitutions; [2] if the act of 1911 be considered the draft of a new constitution, the General Assembly was without power to enact or submit it; [3] if the act be merely a series of amendments, it is in violation of Article 16 of the Constitution and for that reason void; [4] the determination of the question as to whether legislative action is void for want of power, or because the constitutional provisions have been violated is a judicial question." Ibid., 454 (B050388).

Chief Justice Cox wrote the opinion of the Indiana Supreme Court, concluding, "We find, as indicated, that the act of March 4, 1911, known as Chapter 118, is in violation of the Constitution, and void, and the judgment of the lower court is affirmed." Ibid., 509 (B050388).

(8) Woodrow Wilson suffered a debilitating stroke in 1919 that left him all but incapacitated for the remaining seventeen months of his second term. Some officials urged Marshall to assume the powers of the president; Marshall refused, believing this course of action to be unconstitutional. Jehs, "Thomas R. Marshall, " 235-36 (B050191); Harstad, "Thomas R. Marshall, " 240 (B050386).

(10) Marshall returned to Indiana after finishing out his term as Vice President; he and Mrs. Marshall purchased a home in Indianapolis. "Marshall's Death Ends Unique Political Career, " Indianapolis Star, June 2, 1925, p. 8. (B050390)