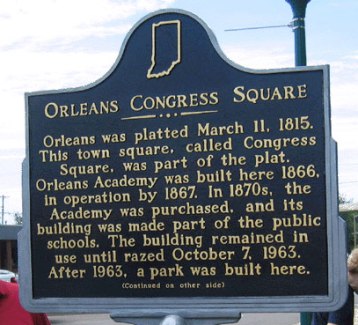 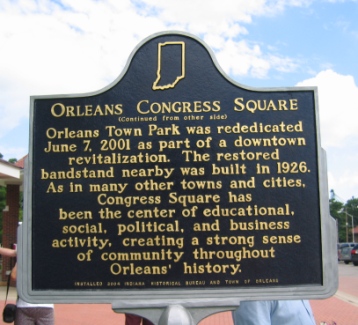 Orleans was platted March 11, 1815. This town square, called Congress Square, was part of the plat. Orleans Academy was built here 1866, in operation by 1867. In 1870s, the Academy was purchased, and its building was made part of the public schools. The building remained in use until razed October 7, 1963. After 1963, a park was built here.

Orleans Town Park was rededicated June 7, 2001 as part of a downtown revitalization. The restored bandstand nearby was built in 1926. As in many other towns and cities, Congress Square has been the center of educational, social, political, and business activity, creating a strong sense of community throughout Orleans' history.

Orleans Town Park was rededicated June 7, 2001 as part of a downtown revitalization.(7) The restored bandstand nearby was built in 1926.(8) As in many other towns and cities, Congress Square has been the center of educational, social, political, and business activity, creating a strong sense of community throughout Orleans' history.(9)

According to Goodspeed Publishing Company, History of Lawrence, Orange, and Washington Counties of Indiana (Chicago, 1884; Reprint, Stouts Print Shop, Paoli, 1965), 557, "In 1831 the citizens, under the leadership of Joseph Crawford and John Sears, built a schoolhouse on the public square, where the school building now [1884] stands." No other evidence of this school has been found.

" . . .the organization and establishment of schools was very slow. Very little was done until after 1840 . . . there was a strong sentiment in the county that the public should not be taxed for the support of the schools . . . . But in many townships no money could be raised by taxation for erecting buildings until the law of 1852 giving trustees power to levy these taxes without consent of the people. . . . By the year 1857, free schools were well under way in all townships of the county." Cogswell, 435.

(5)Orleans Progress-Examiner, October 10, 1963, June 15, 1911, September 2, 1926. On September 5, 1963, a new elementary school opened at 635 East Washington Street. "All interested patrons and friends are invited to view this new building which is replacing the old school building located on the Public Square. The first unit of this old building . . . has been in continuous use until its replacement this year." Orleans Progress-Examiner, September 5, 1963.

(6)In October, 1963, the Orleans Town Board began a movement to build a city park where the school once stood.

Orleans Progress-Examiner, October 17, 1963. "The members of the Town Board of Orleans have asked the civic organizations of the town to suggest means of utilizing the square when the old school building is cleared away . . .

"Let's keep this attractive appearance intact by placing a Park in the Square." Newspaper articles show the progression of the project, "City Park on Square—1964" file at Indiana Historical Bureau.

In May 2002, Orleans received the "Community Legacy Award" presented by Historic Southern Indiana for its downtown revitalization project. Orleans Progress-Examiner, May 2002.

(9) A sampling of reports demonstrates the square's importance. On July 4, 1839—Paoli The True American, July 12, 1839. "Upwards of six thousand persons were supposed to have been present. . . This immense concourse assembled at 10 o'clock in the morning, on the square . . . and were marched from thence to a beautiful grove adjoining town." Speech in 1888 by Republican nominee for president, Benjamin Harrison—Indianapolis News, November 3, 1952. Author Wayne Guthrie received a written account of this event by Mrs. George F. Ham, of Paoli. "The ‘speakin' was held from a flag-draped platform set up in the school yard in the center of the town. And available space around it was really packed with people." George F. Ham and his wife Nellie E. Ham are listed in Paoli Township in the 1900 census. Nellie was born in 1876, making her twelve years old at the time Harrison visited.

In 1897, fire destroyed buildings/businesses on north-east of square. Townspeople gather on the square and work together during the disaster. Orleans Progress, April 22, 1897 describes the fire. 1895 Sanborn-Perris Map indicates that the north-east side was the main business area.