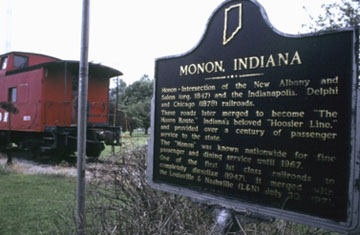 Presented by the Monon Historical Society, 1982

Monon-Intersection of the New Albany and Salem (org. 1847) and the Indianapolis, Delphi and Chicago (1878) railroads. These roads later merged to become "The Monon Route, " Indiana's beloved "Hoosier Line, " and provided over a century of passenger service to the state. The "Monon" was known nationwide for fine passenger and dining service until 1967. One of the first 1st class railroads to completely dieselize (1947), it merged with the Louisville & Nashville (L&N) July 30, 1971.