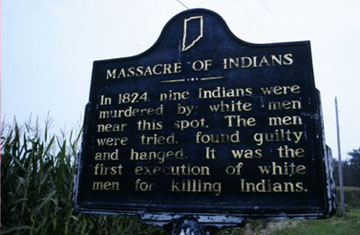 See also the Indians Murdered 1824 marker, installed in Pendleton in 2017.

In 1824, nine Indians were murdered by white men near this spot. The men were tried, found guilty, and hanged. It was the first execution of white men for killing Indians.