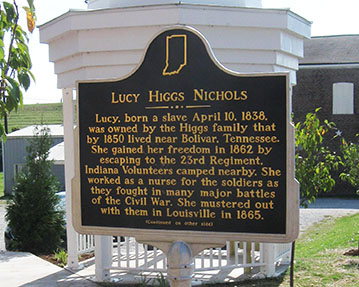 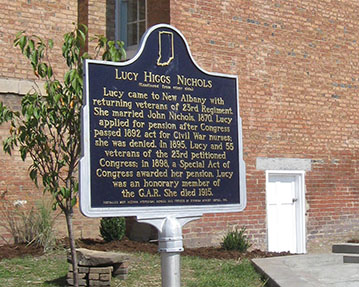 Lucy, born a slave April 10, 1838, was owned by the Higgs family that by 1850 lived near Bolivar, Tennessee. She gained her freedom in 1862 by escaping to the 23rd Regiment, Indiana Volunteers camped nearby. She worked as a nurse for the soldiers as they fought in many major battles of the Civil War. She mustered out with them in Louisville in 1865.

Lucy came to New Albany with returning veterans of 23rd Regiment. She married John Nichols, 1870. Lucy applied for pension after Congress passed 1892 act for Civil War nurses; she was denied. In 1895, Lucy and 55 veterans of the 23rd petitioned Congress; in 1898, a Special Act of Congress awarded her pension. Lucy was an honorary member of the G.A.R. She died 1915.

Lucy, born a slave April 10, 1838,[1] was owned by the Higgs family that by 1850 lived near Bolivar, Tennessee.[2] She gained her freedom in 1862 by escaping to the 23rd Regiment, Indiana Volunteers camped nearby. [3] She worked as a nurse for the soldiers[4] as they fought in many major battles of the Civil War.[5] She mustered out with them in Louisville in 1865.[6]

“Slaves for life,” Lucy, Aaron, and Angeline were listed as part of Eliza Higgs’ (Rueben’s first wife) estate passing to [Winnaford] Amanda, oldest child of Reuben and Eliza Higgs. Amanda died May 1847.  John Higgs, the guardian of Willie, Marcus, and Prudence, who were the half-siblings of Amanda Higgs, filed suit and claimed “Negro property” that Samuel G. Wheless (Amanda’s former guardian) refused to deliver. Lucy, Aaron, and Angelina, “property of Winnaford Amanda Higgs, dec’d” were ordered delivered to Theophilus Higgs and received from Samuel G. Wheless, April 14 [1848]. The three were recovered from Wheless in Yalobusha County, Mississippi, and taken to Hardeman County, Tenn., as the property of Wilie, Marcus, and Prudence Higgs as administered by John Higgs.

“Lucy was born a slave and continued in slavery until she was twenty years old, when she joined the Twenty-third at Bolivar, Tenn., and thus secured her freedom,” according to the New Albany Daily Ledger, December 13, 1898.  The 23rd Regiment, Indiana Volunteers was organized and mustered into service at New Albany, July 29, 1861. The regiment engaged Confederates at Shiloh, Tenn., spent summer 1862 camped at Bolivar, Tenn., then participated in sieges at Vicksburg and Atlanta as well as Sherman’s March to the Sea. They were mustered out at Louisville, Kentucky, July 23, 1865. Ages of individuals are reported as they appear in the primary sources.

Thousands of enslaved African Americans emancipated themselves by heading to Union lines in what W.E.B. Du Bois called “a general strike against the confederacy.” Many went to work in service of the Union, the men mainly as laborers or soldiers, the women as laundresses, cooks, nurses, and even spies. By the time Congress passed the Second Confiscation Act July 17, 1862, the United States Army officially considered formerly enslaved peoples working behind Union lines as “contraband.” Considered spoils of war, they were given protection by the U.S. government to prevent them from contributing to the Southern labor force.  According to historian Ella Forbes, defining them as contraband “allowed the denial of basic civil rights to the African Americans who had liberated themselves by fleeing enslavement” and placed the formerly enslaved “at the mercy of a generally racist bureaucracy which exploited their labor and humanity.”

By escaping the Higgs family, and fleeing to the regiment camped in Bolivar, Lucy became a “captive of war” as described in the Act.

According to her application for nurse’s pension, Lucy “was employed as Nurse by assignment on or about the 1st day of July, 1862 in the Regimental Hospital of 23rd Regt. Indiana vols then in camp at Bolivar Tenn.” She stated that she was “honorably released at Indianapolis, Indiana on or about the 23rd day of July 1865.”

Special Note: The term “aunt,” used to describe Nichols, is part of the “mammy” myth, and is an extension of the “loyal slave” myth.  The aunt/mammy stereotype depicts a desexualized, African American woman who happily serves and cares for whites and was constructed (through southern white nostalgia) to assert the inferiority African American women.

Married April 13, 1870, John and Lucy Nichols lived on Nagel Street in New Albany, after John purchased land there in 1871. According to the New Albany city directories, John worked as a laborer. After John’s death in 1910, Lucy remained in New Albany, as a boarder and as a laundress, according to New Albany City Directories. See Denver Sunday Post article for more information Nichols’ residences and occupations.

When Nichols applied for her pension (after Congress passed the 1892 Nurses’ Pension Act) the Record and Pension Division of the War Department claimed they found no records of employment or payment for her. Starting in 1893, several veterans of the 23rd Regiment submitted affidavits on Nichols’ behalf. In July 1893, she sent an affidavit providing information that she had never been paid for her work. She sent affidavits that responded to additional questions from Pension Office in November and December, 1893. Nichols’ physician, Dr. William A. Burney, sent an affidavit describing her medical problems. Nichols’ claim was rejected in January 1894 but resubmitted for “special examination” in March 1894. On June 27, 1894, her claim was again rejected because “claimant not employed as a nurse by proper authority of the War Dept.”

The petition sent to Congress by Nichols and members of the 23rd Indiana Regiment was sent December 19, 1895 by Benjamin F. Welker to R. J. Tracewell, M.C., Washington, D.C.

According to a December 13, 1898 article in the New Albany Ledger, Congressman W. T. Zenor pushed this Special Act granting Nichols a pension of $12 through Congress.  On December 20, 1898, “An Act Granting a pension to Lucy Nichols” was approved and Nichols’ Pension Application was re-filed.  According to a December 27, 1898 New York Times article, Lucy had been notified that President McKinley signed the act. Nichols’ pension application was approved for admission January 6, 1899. January 26, 1899, the New Albany Daily Ledger reported that the Pension Commissioner ordered checks issued for her pension, including back pay, via a Special Act of Congress.

For information on the GAR (Grand Army of the Republic, see http://www.loc.gov/rr/main/gar/ .