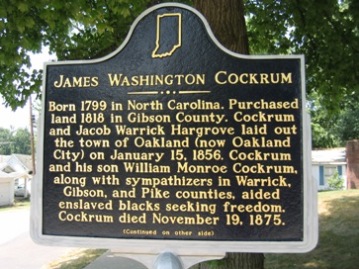 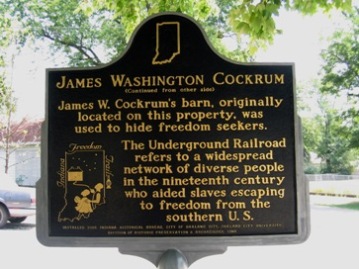 James W. Cockrum's barn, originally located on this property, was used to hide freedom seekers. The Underground Railroad refers to a widespread network of diverse people in the nineteenth century who aided slaves escaping to freedom from the southern U.S.

James W. Cockrum's barn, originally located on this property, was used to hide freedom seekers.(6) The Underground Railroad refers to a widespread network of diverse people in the nineteenth century who aided slaves escaping to freedom from the southern U.S.

* All U. S. Census data has been retrieved from Ancestry.com or Heritagequest accessed at the Indiana State Library.

NOTE: Fergus Bordewich highlights the work of James Cockrum and his son William Cockrum in Bound for Glory: The Underground Railroad and the War for the Soul of America (New York: 2005). In an interview published in the Journal for the Liberal Arts & Sciences, Oakland City University, Vol. 8, No., 3, p. 47, Bordewich stated: "I found Cockrum's book absolutely fascinating as an eye-witness description of how the Underground Railroad operated in one locality. It is not a scholarly work by any measure. . . . But as a memoir, I think it is pretty credible. That is, I believe Cockrum can generally be trusted when he is describing people he knew personally, events he participated in, and conversations that he was a part of, with the caveat that Cockrum was only a teenager at the time, and wrote down his recollections some fifty years after the fact."

The Indiana Historical Bureau has conducted a limited search for the persons named in this chapter as a review of the reliability of Cockrum's work. The numbered statements are from Cockrum. According to Cockrum, p. 92, these events took place circa 1853.

1. Cockrum : Jeff Lewis was black slave working as manager or overseer for his master on a tobacco farm in northwest Kentucky. (p. 75)

8. Cockrum : Jeff Lewis planned to get himself and his wife away to Canada. His wife was owned by man living near Uniontown, Kentucky (p. 85).

9. Cockrum : Lewis met his wife, three other fugitives, and three guards. They were on the north bank of the Ohio River by midnight. They followed the same route â€”Caswell to Hill to Cockrum's barn cellar (pp. 88-89).

10. Cockrum : Later that day, J. J. Kirkman, sheriff or deputy sheriff of Gibson County came to dinner at Cockrum's. He saw one of the three "colored" boys left with Cockrum until they could be sent to Liberia. In U.S. Federal Census, 1850, Joseph J. Kirkman was listed in Princeton, Gibson County, Indiana. The three boys were sons of Jacob Stephenson a free black man from South Carolina who lived in Columbia Township, Gibson County, Indiana until November 1853 when he and his family emigrated to Liberia. Cockrum, pp. 242-43; U. S. Federal Census, 1850; Coy D. Robbins, compiler, Indiana Negro Registers 1852-1865; "Indiana Emigrants to Liberia, " The Indiana Historian (Indianapolis, March 2000), 16.

11. Cockrum : Jeff Lewis, his wife, and the 3 other fugitives continued north following the same route as previously mentioned (p. 92).