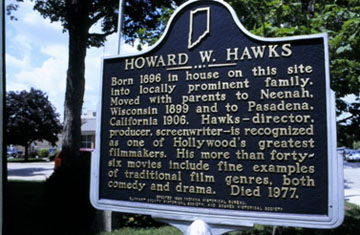 Born 1896 in house on this site into locally prominent family. Moved with parents to Neenah, Wisconsin 1899 and to Pasadena, California 1906. Hawks - director, producer, screenwriter - is recognized as one of Hollywood's greatest filmmakers. His more than forty-six movies include fine examples of traditional film genres, both comedy and drama. Died 1977.