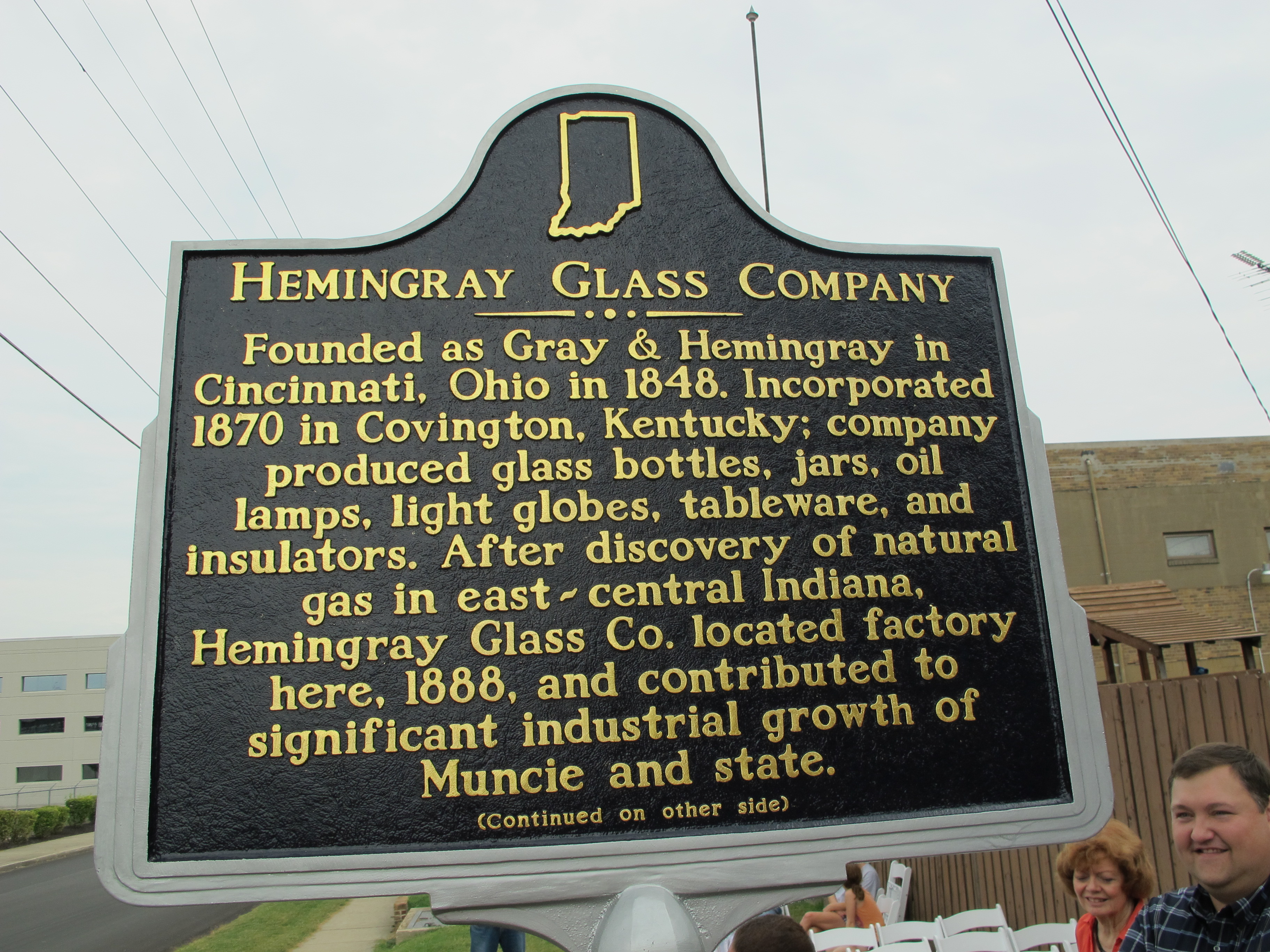 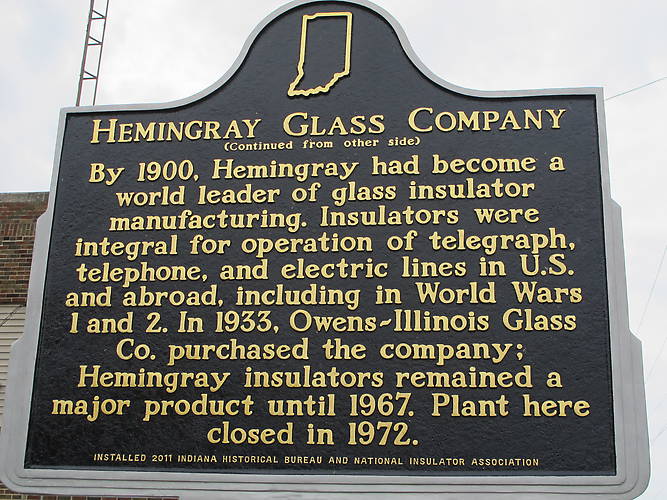 By 1900, Hemingray had become a world leader of glass insulator manufacturing.6 Insulators were integral for operation of telegraph, telephone, and electric lines in U.S. and abroad, including in World Wars 1 and 2.7 In 1933, Owens-Illinois Glass Co. purchased the company;8 Hemingray insulators remained a major product until 1967. 9 Plant here closed in 1972.10

Deeds show that Ralph Gray and Robert Hemingray leased part of lot 61 in Cincinnati, OH on April 5, 1848 to establish their glass company, then known as Gray and Hemingray. Williams' Cincinnati Guide and General Business Directory for 1848-1849 lists Gray and Hemingray as glass manufacturers and places their business on the east side [of] Hammond St. in Cincinnati. Advertisements such as those appearing in the Electrical Review and official histories of the Hemingray Glass Company also confirm the 1848 date.

According to the Muncie Evening Press and histories of the Hemingray Glass Company (then known as Gray and Hemingray), the company relocated its plant operations to Covington, Kentucky in the early 1850s. A warranty deed dated October 19, 1852 reports that Henry Pace sold land in Covington to Gray and Hemingray for $7,000. Operations there continued to grow throughout the 1850s and 1860s. On March 21, 1870 the General Assembly of the Commonwealth of Kentucky approved an act to incorporate the company. The Annual Foreign Corporation Report offers further details of the incorporation, including financial information and officers.

As early as 1851, Charles Cist reported that the company manufactured "tumblers, decanters, packing-bottles, lamp glasses, apothecary shop furniture, and generally, most articles manufactured in [the glass companies in] Pittsburgh." By 1859, he wrote that products peculiar to its works included glass milk pans and atmospheric fruit jars, as well as perfumers' ware, telegraph glasses, and lightning rod insulators, among others. Of all of its products, Hemingray was most well-known for its insulators. See footnotes 6 and 7 for information on the development of the company's glass insulators and their role in communication services. For images of the insulators see http://www.hemingray.info/.

For more information on Indiana's gas boom and its effect on industry see: James A. Glass, "The Gas Boom in East Central Indiana," Indiana Magazine of History 96:4 (December 2000): 313-335; John A. Rupp, "Oil and Gas - A Brief Overview of the History of the Petroleum Industry in Indiana," accessed Indiana Geological Survey, Indiana University website.

[5] "Owens-Illinois Company Buys Local Industry," Muncie Morning Star, May 4, 1933; Clifton J. Phillips , Indiana in Transition: The Emergence of an Industrial Commonwealth, 1880-1920 (Indianapolis: Indiana Historical Bureau & Indiana Historical Society, 1968), 296-302, 365-366; Glass, 313. According to Glass, "Between 1886 and 1901, an eleven-county area in the east central portion of the state became one of the leading centers of heavy industrial production in the United States and the principal manufacturing region of Indiana."

According to Phillips, Muncie experienced major population growth due to the industrialization that followed the gas boom. In 1880, the population of Muncie was 5,219, and by 1900 it had grown to 20,942. The Muncie Morning Star reported in 1933 that "since the establishment of the factory until the present time, employment given by it has been a tremendous factor in the welfare and life of the city of Muncie."

According to Hemingray Telephone and Telegraph Insulators and Coe's The Telegraph, glass insulators were introduced in the 1840s and became widely popular in the last half of the nineteenth century due to the growth of the telegraph and the telephone industries. The network of overhead wires established for these industries required insulation and glass proved useful in protecting electrical lines against bad weather. The Telegraph states that "with some pole lines requiring as many as 2,000 insulators per mile, the extent of the demand [for them] can be imagined." Hemingray Telephone and Telegraph Insulators reported that the invention of the screw-type insulator "so improved lines that dependable service could be given." See footnote 7 for more information on their uses.

On December 19, 1871, the U.S. Patent Office awarded Robert Hemingray a patent for his design of a press for "molding" glass telegraph insulators. The Insulator Patent Reference Library includes four other patents awarded to him by 1900 to help fabricate insulators. According to the Muncie Sunday Star, "development of the manufacture of insulators gained such headway that in 1900 the company gave its entire time to this product and for many years held a position as one of the leading manufacturers in the country." By 1904, the Western Electrician reported that "the Hemingray insulators are used on some of the longest transmission lines and have stood most severe tests. The company's product is in use by some of the largest consumers in the electrical and telephone lines."

The growth of the telegraph and the telephone industries helped transform communication, facilitating the way and ease with which information was shared across the world, including on the battlefields. Commenting on the utility of the telegraphic system, the American Railroad Journal reported in 1842 that "its capability of speedily transmitting intelligence to great distances, for national defence [sic], and for other purposes, where celerity is desirable, is decidedly superior to any of the ordinary modes of communication in use." Insulators proved instrumental in protecting overhead wires, thus aiding in the spread of communication. According to a 1918 Muncie Morning Star article and "Muncie as a Munition Maker," during WWI, Hemingray manufactured mass quantities of these products to be used on telephone poles throughout Europe to help keep army and navy officials in contact. Advertisements in the American Exporter in 1919 credited Hemingray with furnishing insulators to the United States Government "to equip its telegraph, telephone, and signal lines in France." Hemingray glass works were also utilized in WWII (by this time the company was owned by Owens-Illinois) and the Muncie Morning Star of 1944 included examples of the company's glass being used in land mines.

Hemingray (Owens-Illinois) glass works were no less significant on the home front. According to a 1948 issue of Electric Light and Power, "Owens-Illinois Power Insulators play[ed] an important part in many rural electric systems by supplying highly efficient and dependable insulation on medium-voltage pole lines."

According to the Muncie Evening Press and the Muncie Morning Star, the Owens-Illinois Company announced on May 3, 1933 that it had purchased Hemingray Glass Company. Estimates in the newspaper list the purchase price at $1,000,000 and William Levis, president of Owens-Illinois, stated at the time that the Muncie plant [would] be continued in operation under its present management."

In March 1966, Owens-Illinois announced conversion to producing television bulbs would be complete by summer 1967. According to a letter from Ritter, Manager Special Products for Owens-Illinois, the last Hemingray insulators were produced February-April, 1967.

On June 19, 1972, S.F. Schillaci, Vice-President of Owens-Illinois Glass Company's Consumer and Technical Products Division and General Manager of Television Products, wrote to all employees of the Muncie Plant and stated "I deeply regret to inform you that the Company must discontinue operations at the Muncie plant." According to Schillaci, the company had "no alternative because the plant's age and its layout make it impractical to adapt it to the production of the of color television parts that now are required by the industry." Newspaper articles confirm the plans to close the plant that year.