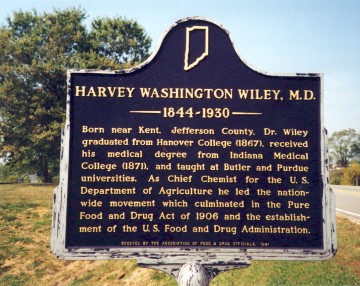 Erected by the Association of Food and Drug Officials, 1981

Visit the Indiana History Blog to learn more about "Old Borax" and his Poison Squad.

Born near Kent, Jefferson County, Dr. Wiley graduated from Hanover College (1867), received his medical degree from Indiana Medical College (1871), and taught at Butler and Purdue universities. As Chief Chemist for the U.S. Department of Agriculture he led the nationwide movement which culminated in the Pure Food and Drug Act of 1906 and the establishment of the U.S. Food and Drug Administration.