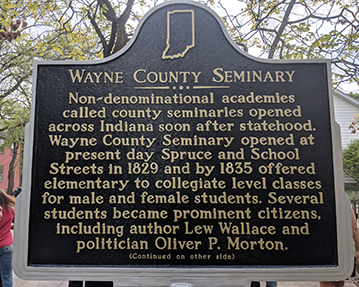 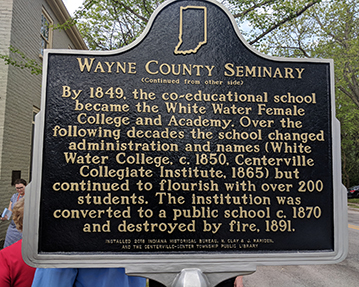 Visit the Indiana History Blog to read a narrative history of Wayne County Seminary and its aspirations for higher education for both male and female students.

By 1849, the co-educational school became the White Water Female College and Academy. Over the following decades the school changed administration and names (White Water College, c. 1850, Centerville Collegiate Institute, 1865) but continued to flourish with over 200 students. The institution was converted to a public school c. 1870 and destroyed by fire, 1891.

By 1849, the co-educational school became the White Water Female College and Academy.[5] Over the following decades the school changed administration and names (White Water College, c. 1850,[6] Centerville Collegiate Institute, 1865)[7] but continued to flourish with over 200 students.[8] The institution was converted to a public school c. 1870[9] and destroyed by fire, 1891.[10]

View a timeline of the Wayne County Seminary created with primary sources by IHB researchers.

The 1816 Indiana Constitution and subsequent acts of the Indiana General Assembly encouraged and provided for the creation of an educational center in each county open to all citizens, though not free of tuition, known as a “county seminary.” Over the next decade, many Indiana counties established a county seminary. The county seminaries were non-denominational and included primary, secondary, collegiate, and classical courses of study. In counties where the township schools flourished, the seminaries offered the higher education classes only.

In January 1827, the Indiana General Assembly passed an act requiring the appointment of “County Seminary Trustees” who were charged with acquiring land and contracting a building. Wayne County appointed its trustees in June 1827. The Wayne County Seminary opened to students by October 1829.

By 1835, the academy included classes in both the elementary and “higher branches” of education for both male and female students. On December 12, 1835, the Richmond Palladium referred to the seminary as “an academy in which the higher branches are taught.” On December 26, 1835, in an announcement in the Richmond Palladium, the Trustees of the Wayne County Seminary encouraged those citizens “who know and appreciate the worth of a good education . . . to place their sons, daughters and wards within this institution.” They also listed the professors, tuition costs, and classes, which included spelling, reading, penmanship, arithmetic, grammar, history, book keeping, geography, algebra, geometry, surveying, natural and moral philosophy, astronomy, and Latin and Greek languages.

For information on the building, see footnote 5.

Between 1836 and 1839, during the administration of respected instructor S.K. Hoshour, several students who later became prominent Hoosiers attended the seminary, including Lew Wallace and Oliver P. Morton. In a December 26, 1835 announcement in the Richmond Palladium, the Trustees of the Wayne County Seminary announced that the current Superintendent G. C. Smith would “be aided in his labors” by S.K. Hoshour. According to Hoshour himself in his autobiography, he took over the administration of the seminary starting in 1836. He wrote: “It was four years under my supervision.” He noted that during this time he had students “of the best families of the State of Indiana. . . such as the Governor’s (D. Wallace) two sons – sons and daughters of professional men; even the son of an Indian Chief… embryo judges, governors, and a United States Senator – O.P. Morton.” Lew Wallace confirms this recollection in his own autobiography. While the “Indian Chief” detail seems apocryphal, seminary alumni Isaac Julian also recollected that “the son of a Miami chief” attended the school. This has not been confirmed with contemporary primary sources.

By the early 1840s, the “Female Department” of the seminary was located in a second building, administrated by a female teacher, and offered the same advanced classes as the male department. Referring to a change in administration for the seminary, “Miss Thorpe” announced March 1, 1842 “that the late change in the Wayne County Seminary, will in no way affect her school; but that it will, as heretofore, remain under her exclusive control.” On April 13, 1942, the Wayne County Record praised the teaching of Miss S. Dickinson as better than any other teacher that had ever taught at the seminary, male or female. The paper reported that the students displayed a deep understanding of their subjects during the public examinations. By the subjects listed in the article, it’s clear that some of the young women were studying the same “advanced” subjects as the young men. The article notes that Miss Dickinson “has now been a Teacher in the Female Department of the Wayne County Seminary for two years.”

On October 25, 1843, the Wayne County Record reported on the building progress and organization of the Wayne County Seminary. It described the 40x30’, two-story east and west wing buildings and reported that the larger 40x80’ center building would be completed the following summer. The article states that there are three schools within the seminary, “one Male and two Female.” The young men and women had access to the same education. According to the Wayne County Record: “In addition to the ordinary branches of an English Education, Pupils, in either the Male of Female departments, if they desire it, will be instructed in Astronomy, Botany, Natural Philosophy, Mathematics, Geology, and the Latin and French Languages.”

In 1849, the female students founded the Sigournian Society, a literary organization with its own library at the school. They held exhibitions of original essays, held debates, and performed music. The 1851 Catalogue of the White Water Female College and Academy noted: “There is one Literary Society in connection with the College – the Sigournian – with a small library and select books.” On July 23, 1851, the Richmond Weekly Palladium mentioned an address before the society in connection with final exams and graduation exercises. On December 24, 1851 the Richmond Weekly Palladium published a first-person account of a Wayne County attorney who attended the exhibition of the Sigournian Society, which he described as “connected with the ‘Whitewater Female College’ at Centreville.”  He praised the event, noting particularly original essays and dialogues as well as a pro/con debate on the topic: “Should the American Government aid the Hungarians in the struggle for liberty?” There were also musical performances by the young women. In an 1891 letter, Isaac Julian described the women of the “Sigourneau Society,” as “quite brilliant” In 1915 the Richmond Palladium-Item reported that someone found a badge of the Sigournian Society and an 1852 catalogue of White Water College. The badge said that the society was founded in 1849.The logo was an open book with a halo of light reading: “Many shall run to and fro and knowledge shall be increased.”

By the 1850s, the school, still under the “patronage” of the Methodist Conference, became known simply “White Water College.” The State Sentinel reported on the contents of the catalogue of the White Water Female College and Academy for the year ending June 30, 1852: “The Institution is . . . under the patronage of the Indiana and North Indiana Conferences of the Methodist Episcopal Church. After the name changed in December of 1852 (see following note), the Richmond Weekly Palladium noted that the Methodist Episcopal Conferences of Indiana would appoint the Board of Trustees. And when the Daily State Sentinel reported that they received the catalogue of the White Water College for the year ending June 29, 1853, they noted: “the College is under the direction of the Methodist Episcopal Church – Cyrus Nutt, President – and is prospering.”

In June 1853, the Daily State Sentinel reported that they received the catalogue of the White Water College and noted that 208 students (109 female and 99 males) were enrolled that year. There are several highlights from this period. The college president spoke eloquently defending equal education for women. The Board of Trustees adopted a resolution to sell scholarships to Wayne County citizens without a student at the school to support needy scholars.

Starting in 1855, the school began experiencing “financial difficulties” and “the Board thought fit no longer to become responsible for the salaries of the teachers and therefore proposed to lease the College for a series of years…” Three gentlemen, last names “Edwards, Shortridge, and Roberts, then leased the building for five years commencing March 1856.” The College and grounds sold at Sherriff’s sale to W. H. Barnes who “remodeled and repaired the entire premises.” The register noted: “The buildings were fitted up for a boarding school, and notwithstanding the panic produced by the breaking out of the rebellion, the school for a time, was large and well patronized from abroad.”

During the Civil War, Barnes offered discounted and free tuition to children of local volunteers. The Palladium reported that in order to “encourage enlistments in the regiment now organizing in this district,” President Barnes announced that Whitewater College would accept children of volunteers and half the regular rate of tuition or free if they needed boarding.

In 1866, 87 women, 87 men, and 40 music students (who were mainly or all women) attended the Centreville Collegiate Institute; 214 students total. The academy was divided into a primary department, an intermediate department, and a collegiate department. The collegiate department was further divided into freshman, sophomore, junior and senior classes as well as a classical course that focused on Greek and Latin. The Palladium reported on the “flourishing condition” of the Centerville Collegiate Institute as represented by the annual catalogue they received. They note that the next term would start September 30, 1866 with a “full corps of Teachers” and thirty boarders.

In the early 1870s, the town of Centerville purchased the buildings and converted it into a public school.