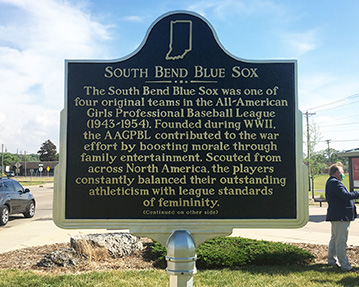 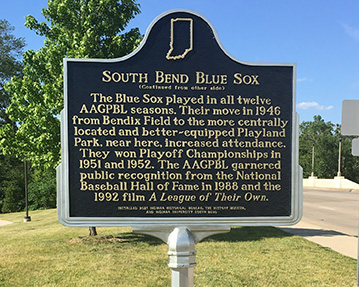 To learn more, listen to the IHB podcast Talking Hoosier History (or read the transcript) for the episode: "The Dutiful Dozen:" South Bend Blue Sox and Women's Professional Baseball.

The South Bend Blue Sox was one of four original teams in the All-American Girls Professional Baseball League (1943-1954). Founded during WWII, the AAGPBL contributed to the war effort by boosting morale through family entertainment. Scouted from across North America, the players constantly balanced their outstanding athleticism with league standards of femininity.

The Blue Sox played in all twelve AAGPBL seasons. Their move in 1946 from Bendix Field to the more centrally located and better-equipped Playland Park, near here, increased attendance. They won Playoff Championships in 1951 and 1952. The AAGPBL garnered public recognition from the National Baseball Hall of Fame in 1988 and the 1992 film A League of Their Own.

The South Bend Blue Sox was one of four original teams in the All-American Girls Professional Baseball League (1943-1954).[1] Founded during WWII, the AAGPBL contributed to the war effort by boosting morale through family entertainment.[2] Scouted from across North America, the players constantly balanced their outstanding athleticism with league standards of femininity.[3]

The Blue Sox played in all twelve AAGPBL seasons.[4] Their move in 1946 from Bendix Field to the more centrally located and better-equipped Playland Park, near here, increased attendance.[5] They won Playoff Championships in 1951 and 1952.[6] The AAGPBL garnered public recognition from the National Baseball Hall of Fame in 1988 and the 1992 film A League of Their Own.[7]

There were several factors that spurred Philip K. Wrigley, the owner of the Chicago Cubs, to found the League. First, softball had developed across the country as a popular sport for women since the turn of the twentieth century, and women’s softball leagues spanned from coast to coast. Second, by 1943, America had “near-total involvement” in the Second World War, which affected nearly every aspect of society, including recreation and entertainment.  This led directly to the third factor. Because of the manpower requirement for the war effort, fear emerged among club owners that Major League Baseball would be shut down or postponed during the war. According to Merrie Fidler, “Thus it was that the AAGSBL’s beginnings germinated out of the potential wartime demise of Major League Baseball.” Wrigley wanted to keep Wrigley Field operational even if men’s baseball was shut down. However, this fear did not come to fruition, and Wrigley knew this before the league got going, so he shifted gears. Instead of its purpose being to replace men’s baseball, Wrigley adjusted the AAGSBL objectives “to compliment [sic] the war effort in the mid-sized industrial communities that supported its teams.” (Fidler, 33) In Wrigley’s 1943 press release about the League, he justified its existence as something that contributed to the war effort: “Americans, more than any other people, depend upon organized, competitive sports for their recreation need. By cheering their favorite players and teams, mingling with other fans and enjoying the excitement and color of various sports events they find an outlet for their pent-up energy and an escape from their problems and troubles. Americans thrive on outdoor games and the crowds that attend them, and in war times this kind of entertainment becomes an actual necessity.” Wrigley wanted to provide morale to the public and improve women’s softball, as well as the players standing in society by the League embracing the “highest social standards” of the day (Fidler, 34).

League President Albert McGann emphasized in the South Bend Tribune in 1946 that the Blue Sox were a “non-profit organization, a community project in the strictest sense of the word. The Blue Sox afford wholesome entertainment for the whole family. Twenty-five to 40 percent of the attendance is made up of women and girls. Children account for five to 15 per cent.”

Wrigley’s scouts for the League combed the United States and Canada for the best softball players, and in the early years began recruitment from “municipal, state, regional, and national American Softball Association tournaments” (Fidler, 182). The Cubs’ main scout, Jimmy Hamilton, was responsible for establishing League try-outs across the US and Canada and selecting the League’s original players. Player demographics gathered from 1943-1951 show that the players hailed from 31 US states, 4 Canadian provinces, and Cuba.

After spring training in 1947 which took place in Havana, Cuba, the League signed its first Cuban player. The League sponsored several post-season exhibition tours across Latin America and South America in the late 1940s, which prompted further recruitment of Latin American players. Not only did the tours increase international publicity for the League, but also promoted the development of women’s baseball similar to that being played by the AAGPBL in places such as Cuba and Puerto Rico.

While Cuban players were welcomed into the fold, no African American players were ever officially offered a spot on an AAGPBL team. There appeared to be an unofficial policy of segregation throughout the League. Major League Baseball had not been integrated during the early years of the AAGPBL, but even after MLB integration with Jackie Robinson in 1947, the League remained off-limits to Black women. In at least two separate instances, Black women tried out for the South Bend Blue Sox, but never officially made the roster. Prior to the opening of the 1951 season, two Black women “worked out with the Sox” in early May 1951, but no further mention of either woman appeared in the South Bend Tribune. After the 1951 season concluded, the League Board of Directors discussed the possibility of Black women joining the League, with varying ball clubs coming down on different sides of the issue. According to meeting minutes, “The consensus of the group seemed to be against the idea of colored players, unless they would show promise of exceptional ability, that in the event a club did hire one of them, that none of the clubs would make her feel unwelcome.” Another Black woman tried out for the Blue Sox in 1952, but she was not mentioned in the South Bend Tribune coverage of that season at all and apparently never made it onto the roster. It is clear that Black women wanted to play in the League but were not actively recruited and were often met with both unofficial and official hostility. Historian Martha Ackmann asserts that Toni Stone, the first woman to play in the male Negro Leagues, was interested in playing with the AAGPBL and wrote League executives about trying out. Stone never received a response. Similarly, Mamie Johnson, a Black player following in the footsteps of Stone, attended an AAGPBL tryout in the Washington D.C. area with her friend and first baseman Rita Jones. According to an interview with Johnson, when she and Jones arrived at the try-outs, “they looked around and saw that all the players were white…Before they could put on their baseball gloves, AAGPBL players and organizers gave them a stare that communicated everything.” The pair was clearly not welcome.  Johnson recalled, “It dawned on me. They think we’re not as good as [they] are.”

The lack of inclusion of Black players likely was connected to Wrigley’s emphasis on white middle class notions of femininity that were built into every aspect of the League. This brand of femininity was couched in language surrounding respectability, but race and sexuality certainly played into it. In this instance, respectability meant white and heterosexual. Wrigley believed that for society to fully accept women’s professional baseball and to shed stereotypes of women softball players, he would have to highlight the players’ femininity. The women would be promoted as “All-American girls,” which included the adoption of a skirted uniform in pastel colors, employing team chaperones, and enrolling the players in charm school. The League also implemented strict codes of conduct. For instance, the players were required to abide by such League rules as “Always appear in feminine attire when not actively engaged in practice or playing ball,” “Boyish bobs are not permissible,” and “Lipstick should always be on.”

Over the course of the League’s twelve-year existence, fifteen different teams operated but only ten teams existed simultaneously in any given season. The Rockford Peaches and the South Bend Blue Sox were the only two teams to play in every season from 1943 to 1954.

For the first three years when South Bend played at Bendix Field and the war raged on, their attendance hovered between 40,000-50,000. Since the team failed to make the playoffs, post-season games did not bump attendance records.

After the move to Playland Park, however, attendance rose dramatically. Several factors contributed to this. The first was the end of the war and with it various wartime travel restrictions such as gas and tire rationing that had previously limited some fans from attending games. Second and related to the first, Bendix Field was located on the far west side of town and was not easily accessible and offered limited parking and seating. Playland, however, was centrally located in South Bend, offered plenty of parking both free and paid, provided more seating, including 2600 permanent covered seats for inclement weather, and featured a brand-new lighting system that was more powerful than that at Bendix as well as nicer accommodations for the players (showers and dressing rooms), fans (unimpeded views), and press (better location and lighting around the new press box). Third, with the addition of new teams, League attendance across the board increased dramatically over the next few years, peaking in 1948 for the League.

IHB does not have attendance figures for South Bend for the final two seasons of the League.

Not only did they win the playoff championships twice (defeating the Rockford Peaches both times), but the South Bend Blue Sox were League champions twice as well. They tied with Rockford for the pennant in the 1949 season with a record of 75 wins and 36 losses and then won outright in 1951. For more on their come-from-behind dramatic win of the 1952 playoffs after player walkouts, listen to our Talking Hoosier History podcast episode “‘The Dutiful Dozen’: The South Bend Blue Sox and Women’s Professional Baseball.”

The players from the AAGPBL were not officially inducted into the National Baseball Hall of Fame but rather were honored within a permanent exhibition titled “Women in Baseball.” The opening of the exhibit in November 1988 in part inspired the hit movie directed by Penny Marshall, which starred Tom Hanks, Geena Davis, and Madonna. Both the permanent exhibit and the popular film brought the AAGPBL back into the public limelight three decades after it folded.