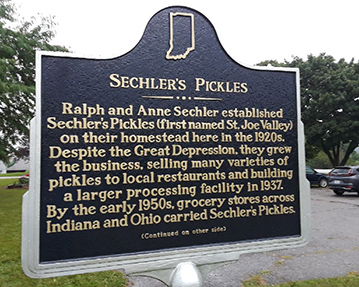 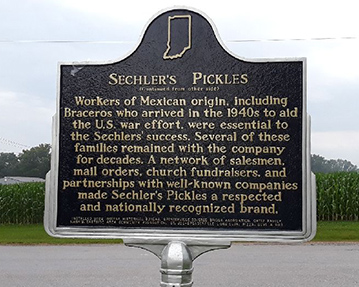 Ralph and Anne Sechler established Sechler’s Pickles (first named St. Joe Valley) on their homestead here in the 1920s. Despite the Great Depression, they grew the business, selling many varieties of pickles to local restaurants and building a larger processing facility in 1937. By the early 1950s, grocery stores across Indiana and Ohio carried Sechler’s Pickles.

Workers of Mexican origin, including Braceros who arrived in the 1940s to aid the U.S. war effort, were essential to the Sechlers’ success. Several of these families remained with the company for decades. A network of salesmen, mail orders, church fundraisers, and partnerships with well-known companies made Sechler’s Pickles a respected and nationally recognized brand.

Ralph and Anne Sechler[1] established Sechler’s Pickles (first named St. Joe Valley)[2] on their homestead here in the 1920s.[3] Despite the Great Depression, they grew the business, selling many varieties of pickles to local restaurants[4] and building a larger processing facility in 1937.[5] By the early 1950s, grocery stores across Indiana and Ohio carried Sechler’s Pickles.[6]

Workers of Mexican origin, including Braceros who arrived in the 1940s to aid the U.S. war effort, were essential to the Sechlers’ success.[7] Several of these families remained with the company for decades.[8] A network of salesmen, mail orders, church fundraisers, and partnerships with well-known companies made Sechler’s Pickles a respected and nationally recognized brand.[9]

Anna Florence Martindale (1892-1971) and Ralph E. Sechler (1894-1962) of Dekalb County, Indiana were married in 1917. Anna changed her name to Anne after the wedding. Both Sechlers worked as teachers in local schools. Ralph taught at the Carr School before attending Indiana State Normal School in Terre Haute and Ana taught home economics at Seymour Indiana High School. In 1917, Ralph enlisted in the U.S. Army. The army retained him as a teacher for officer candidates at Camp Taylor in Louisville and he served in this capacity for the duration of the war.

In 1919, after his discharge from the army, Ralph and Anne Sechler moved to Fort Wayne where Ralph went to work for the D. M. Sears Company, a processing and canning operation for pickles and other food products. Starting in 1920, Sechler began leasing some processing stations for his own operation, collecting cucumbers from local farmers and processing them into pickles. In 1923, Sechler began operating independently, calling his business “St. Joe Valley.” (See footnote 2). By 1926, the Sechlers owned a farm one mile north of St. Joe on Route One. They used sections of their home to can the pickles and run the business and, in the early 1930s, converted their barn into a pickle processing center. Sechler’s Pickles still operates on this site as of the date of the marker installation. According to the company website, “Our factory and showroom are at 5686 SR1 just north of St. Joe, Indiana.”

By 1930, the Sechlers were processing dill pickles themselves, while purchasing sweet varieties from Chicago processors. They sold these varieties to local grocery stores and restaurants. A 1930 grocery store ad listed whole, sweet, sweet mixed, and sweet relish from St. Joe Valley. Around 1933, according to the company history written by Ralph’s son Frank Sechler, Ralph and Anne turned their barn into a pickle processing factory and a driver began delivering in a new truck marked “St. Joe Valley Pickles.” (See footnote 2 for more on name). In 1937, the made major improvements to the processing facility, hooking up a steam engine to the threshing machines and pickling tanks, which increased production. Later that year, the facility burned, but they quickly rebuilt. (See next note for more).

The Sechlers employed both Mexican American migrant workers (that is, U.S. residents of Hispanic origin, many of whom lived in Texas) and Bracero workers. Braceros were Mexican citizens who came to work in the United States on special visas at the behest of the U.S. government through an agreement with the Mexican government. During World War II, their labor helped the U.S. meet quotas to feed its soldiers abroad and assist its allies. According to the corporate history written by founder Ralph Sechler’s son Frank Sechler, “Hispanics were very much a part of our operations, both in the field and in the plant.” The Sechlers housed the workers on site and many returned year after year. (See next note). While the local newspapers only reported on crime and accidents in relation to these workers, Frank Sechler recorded their hard work, commitment to family, and lasting relationship with the company. When the U.S. government discontinued the Bracero Program in 1966, Sechler’s Pickles adjusted by making the operation more attractive to migrant workers. They tied their contracts to local tomato growers, to extend the growing/working season. They also increased payments to local cucumber growers to increase their yield. For more on Braceros in Indiana see: Jill Weiss Simins, “Bracercos in the Cornbelt,” Indiana History Blog, December 13, 2018, https://blog.history.in.gov/braceros-in-the-cornbelt-part-one/

Frank Sechler, son of founder Ralph Sechler, included several pages on the contributions workers of Mexican origin to Sechler’s Pickles operations and mentions several families who remained with the company for decades. He wrote that starting in 1944: “Our first and longest lasting association was with the Floyd Ortiz family. Floyd had come with his family to Paulding, Ohio to work for the Paulding Sugar Beet Co.” The Sechler’s worked out a schedule with the beet company and once the Ortiz family finished the beet harvest, they came to St. Joe to work in the fields and factory. Frank Sechler continued:

“You might say the relationship is still lasting as just about all of the 14 children worked for us in the field, and usually after they became 16, they went to work in the factory, I number of the grandchildren have worked some and you can bet, when the pepper and tomato plants come in the spring, you will see a number of Ortiz descendants (second, third, and fourth generations) helping and having a lot of fun.”

Sechler wrote that the Ortiz family purchased an 80-acre farm east of St. Joe, near their church. Floyd Ortiz’s daughter Dorothy Chew and daughter-in-law Betty Ortiz were working the pepper planter at the time he was writing his corporate history in 1996.

The Braceros lived in a camp that “consisted of an old Sechler farm house and some of the sugar beet Quonset housing which had been given to us [by the beet company]. The Braceros painted in large letters on the metal roof: “Rancho Allegre.”

Aurellio Rivera was another bracero worker who was important to the Sechlers, returning year after year until the program ended, and helping to teach Frank Spanish. Frank reported, “the most Braceros we had in one year is 65.”

Finally, Frank writes of the importance of the Rosalio and Paula Luna family, who began working for the company in 1964. He explained: “This was the start of a 30-year (and still going) relationship.” As of 1996, their children, Rasalio Jr. and Juan and their families, “take care of and harvest all of our peppers, and of course, the green tomatoes. Plus, we always have some pickles to keep them busy full time. It’s been a great relationship.”

In the 1930s, the Sechlers hired local women to help can pickles and men to drive delivery trucks, expanding the reach of their operation. By 1941, five delivery drivers covered much of Indiana and parts of Ohio, providing grocery stores and restaurants with St. Joe Valley pickles. While by the 1950s, some grocery stores advertised ““We Carry a Full Line of Sechler Pickles,” most offered only a handful of the dozens of Sechler products. Thus, the company met consumer demand through a mail order business. Starting in the late 1950s, in order to expose new markets to their products, the Sechlers provided church groups with wholesale priced goods to sell as fundraisers, increasing the demand for and familiarity with the brand in new areas. According to Frank Sechler’s corporate history, the company was able to partner with Kroger (no date is given), which brought their products to Pennsylvania and New York. Sechler’s also sold their pickles under the Tony Packo’s brand name, a popular Ohio restaurant that helped expand their reach in the 1980s.

While other brands dramatically changed the way they produced and preserved food products in the second half of the Twentieth Century, Sechler’s maintained the same recipes and many of the same production processes. They have received much respect and appreciation from local press for their adherence to the historically successful processes, such as brining in wooden barrels.