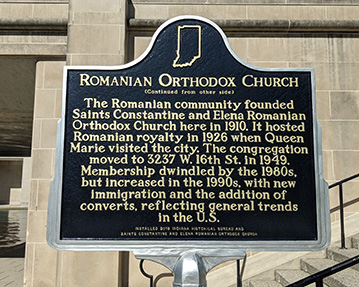 Romanians came to Indiana in the early 1900s in search of a better life. Attracted by industrial jobs, many joined other Eastern European immigrants and settled in nearby communities, working in packinghouses and factories. They preserved their Romanian culture, language, and traditions by establishing their own religious institutions and fraternal organizations.

The Romanian community founded Saints Constantine and Elena Romanian Orthodox Church here in 1910. It hosted Romanian royalty in 1926 when Queen Marie visited the city. The congregation moved to 3237 W. 16th St. in 1949. Membership dwindled by the 1980s, but increased in the 1990s, with new immigration and the addition of converts, reflecting general trends in the U.S.