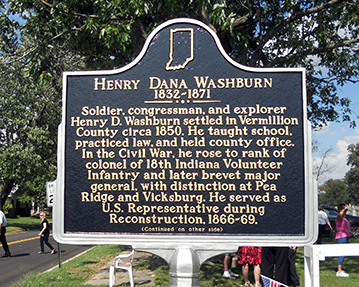 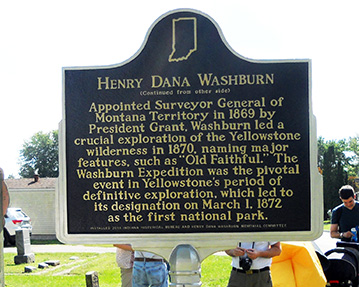 Soldier, congressman, and explorer Henry D. Washburn settled in Vermillion County circa 1850. He taught school, practiced law, and held county office. In the Civil War, he rose to rank of colonel of 18th Indiana Volunteer Infantry and later brevet major general, with distinction at Pea Ridge and Vicksburg. He served as U.S. Representative during Reconstruction, 1866-69.

Appointed Surveyor General of Montana Territory in 1869 by President Grant, Washburn led a crucial exploration of the Yellowstone wilderness in 1870, naming major features, such as “Old Faithful.” The Washburn Expedition was the pivotal event in Yellowstone's period of definitive exploration, which led to its designation on March 1, 1872 as the first national park.