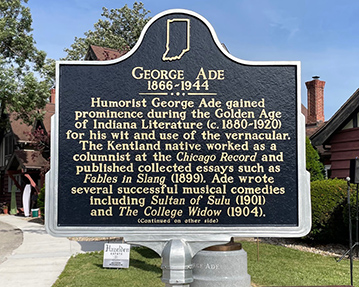 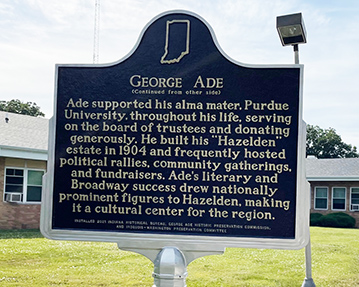 Humorist George Ade gained prominence during the Golden Age of Indiana Literature (c. 1880-1920) for his wit and use of the vernacular. The Kentland native worked as a columnist at the Chicago Record and published collected essays such as Fables in Slang (1899). Ade wrote several successful musical comedies including Sultan of Sulu (1901) and The College Widow (1904).

Ade supported his alma mater Purdue University throughout his life, serving on the board of trustees and donating generously. He built his “Hazelden” estate in 1904 and frequently hosted political rallies, community gatherings, and fundraisers. Ade’s literary and Broadway success drew nationally prominent figures to Hazelden, making it a cultural center for the region.