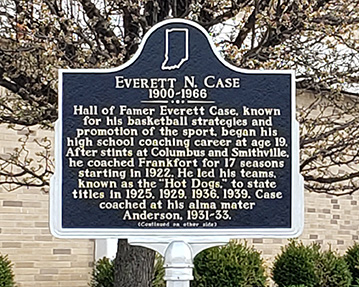 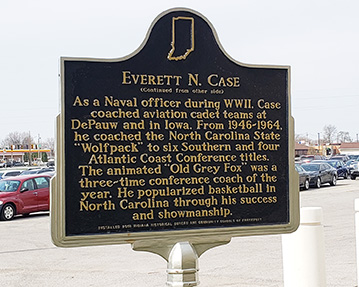 Hall of Famer Everett Case, known for his basketball strategies and promotion of the sport, began his high school coaching career at age 19. After stints at Columbus and Smithville, he coached Frankfort for 17 seasons starting in 1922. He led his teams, known as the “Hot Dogs,” to state titles in 1925, 1929, 1936, 1939. Case coached at his alma mater Anderson, 1931-33.

As a Naval officer during WWII, Case coached aviation cadet teams at DePauw and in Iowa. From 1946-1964, he coached the North Carolina State “Wolfpack” to six Southern and four Atlantic Coast Conference titles. The animated “Old Grey Fox” was a three-time conference coach of the year. He popularized basketball in North Carolina through his success and showmanship.