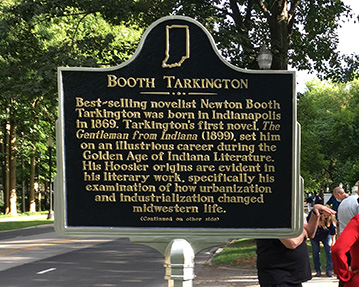 Best-selling novelist Newton Booth Tarkington was born in Indianapolis in 1869. Tarkington’s first novel, The Gentleman from Indiana (1899), set him on an illustrious career during the Golden Age of Indiana Literature. His Hoosier origins are evident in his literary work, specifically his examination of how urbanization and industrialization changed midwestern life.

Tarkington was a prolific author of short stories, plays, and novels, some of which were made into Hollywood movies and performed on Broadway. He was renowned for his works about adolescent adventures, such as the Penrod series. He won Pulitzer Prizes in 1919 for The Magnificent Ambersons and 1922 for Alice Adams. Tarkington lived here from 1923 until his death in 1946.

Best-selling novelist[1] Newton Booth Tarkington was born in Indianapolis in 1869. [2] Tarkington’s first novel, The Gentleman from Indiana (1899), [3] set him on an illustrious career during the “Golden Age of Indiana Literature.”[4] His Hoosier origins are evident in his literary work, specifically his examination of how urbanization and industrialization changed midwestern life. [5]

Tarkington was a prolific author of short stories, plays, and novels, some of which were made into Hollywood movies and performed on Broadway. [6] He was renowned for his works about adolescent adventures, such as the Penrod series. [7] He won Pulitzer Prizes in 1919 for The Magnificent Ambersons and 1922 for Alice Adams.[8] Tarkington lived here from 1923 until his death, 1946. [9]

A 2004 article in The Atlantic described Tarkington as a “Book-of-the-Month Club unto himself: five million copies sold in a pre-paperback era; three dozen volumes of fiction, a score of plays.” His extensive body of work was comprised of novels (many of which were serialized in magazines), novellas, short stories, original plays, and screen adaptions of his works. Upon his death in 1946, the New York Times noted that Tarkington wrote “some forty novels and about twenty plays.” Tarkington’s novels earned him national praise and a Pulitzer Prize for The Magnificent Ambersons in 1919 and Alice Adams in 1922. While he was primarily recognized as a novelist, he authored and co-wrote several plays, many of which were performed on Broadway. According to a 1931 New York Times article, Tarkington began writing plays in 1901, when Evelyn Greenleaf Sutherland assisted him with the dramatization of his best-selling Monsieur Beaucaire. This was followed by a number of plays, including “Mister Antonio,” “The Country Cousin,” “Tweedles,” and his most successful Broadway play “The Man from Home,” co-written with Harry Leon Wilson. Some of Tarkington’s novels were made into films, such as The Magnificent Ambersons, directed by Orson Welles, and Alice Adams, featuring Katharine Hepburn and Fred MacMurray.

The Hoosier author possessed a unique ability to depict the foibles and triumphs of youth. Edwin Francis Edgett of the Boston Transcript aptly described his talent in 1921, stating that:

Some years ago, Mr. Tarkington discovered that he possessed a knack at the revelation of the eccentricities of adolescent manhood and womanhood, and in ‘Penrod,’ ‘Penrod and Sam’ and ‘Seventeen,’ both within the covers of books and on the stage, he set the world a-laughing. Since then, he seems to have been unable to keep this manner of youthful personage out of his pages, the result being that both ‘The Magnificent Ambersons’ and ‘Alice Adams’ seems at times to be nothing better than a series of farcical episodes portraying the vagaries and extravagant mental and physical activities of youth.

Tarkington’s colorful portrayals of adolescence earned him local and national praise. The Fort Wayne Journal Gazette compared him to Mark Twain and noted that “The man who has the art to draw men away from the morbid stories of idealized vice to follow the amusing troubles and innocent intrigues of the boy in his teens is serving a high moral purpose.” The Sun of Boston, Maryland similarly noted “Not since Mark Twain wrote his inimitable story of ‘Huckleberry Finn’ has such a study of boy-just everyday incomprehensible boy-been presented as that offered by Booth Tarkington in the short, but by no means simple, annals of ‘Penrod.’”

Tarkington won the Pulitzer Prize in the Novel category (renamed “Fiction” in 1947) in 1919 for The Magnificent Ambersons and 1922 for Alice Adams, receiving a $1,000 award in each year “for the American novel published during the year which shall best present the wholesome atmosphere of American life and the highest standard of American manners and manhood.” He is one of a handful of fiction writers to win multiple prizes. His body of work received numerous accolades, including the National Institute of Arts and Letters gold medal in 1933, bestowed only once every eight years to a fiction writer. Regarding the National Institute honor, the Indianapolis News noted that “he is an able craftsman in the construction of his stories, but his characters rise above the story and survive it . . . and become real in the minds of the people and inhabit the mass imagination.”

The Encyclopedia of Indianapolis noted that Tarkington moved from 1100 North Pennsylvania Street to another Indianapolis residence at 4270 North Meridian to “escape the noise and smoke of the changing urban world which he at times lamented in his work.” He split his time between 4270 North Meridian and his home in Kennebunkport, Maine. According to the National Park Service, Tarkington’s house was built in the Tudor and Craftsman style and is part of the North Meridian Street Historic District. Tarkington lived at this address until his death in 1946.

Tarkington was born and died in Indianapolis, splitting his later years between the Hoosier city and Kennebunkport, Maine. Tarkington witnessed the transformation of the Hoosier capitol stemming from the automobile and industrialization. This served as the basis of many his literary works. A November 26, 1927 newspaper article noted that his book Growth “is a minutely faithful picture of the various aspects of Indianapolis life from its more or less idyllic little city days of half a century or more ago to the skyscraping, sprawling and smoggy present.” David Bodenhamer and Robert G. Barrows summarized in The Encyclopedia of Indianapolis that Tarkington employed a “fictionalized version of Indianapolis to describe the transformation of Midwestern life by urban industrialization.” (See footnote 5 for more about how Tarkington’s Hoosier roots influenced his literary work).

According to a 1902 Indianapolis News article, after Tarkington received numerous rejection slips for his manuscripts, his sister took it upon herself to approach a New York publisher using the connections of literary friends. She demanded the publisher read the manuscript of The Gentleman from Indiana and convinced him to be the first to publish her brother’s works. Historian Clifton J. Phillips noted that when the book came out in 1899 it “immediately launched him upon a successful literary career, presented a somewhat sentimentalized version of Midwestern small-town life, using local-color touches.” The Indianapolis News reported that year that the book had been printed as a serial in McClure’s Magazine, generating widespread attention of Indiana readers. The paper stated that “the fact can not be ignored that throughout Indiana it has aroused considerable criticism,” noting some Hoosiers felt the book conveyed “Indiana people to be more provincial and ignorant than they are in reality.”

Ultimately, Hoosiers embraced the story set in their home state, so much so that this book, along with the successive Monsieur Beaucaire, proved enough to get him elected to the House of Representatives during the Marion County election on 1902. The Republic of Columbus, Indiana noted in October of that year that although Tarkington “is unknown to the party workers, the fame of his stories have been sufficient to land him a nomination.” According to Justin E. Walsh’s The Centennial History of the Indiana General Assembly, 1816-1978, Tarkington served only one session, becoming completely disillusioned with politics. However, he utilized his legislative experience as material for his 1905 In The Arena, which was set in a midwestern legislature.

According to Phillips, Indiana “produced an astonishingly large number of writers who earned national literary fame in the period extending from 1880 to 1920.” He referred to this period as the “Golden Age of Indiana literature,” comprised of the works of popular authors such as James Whitcomb Riley, Lew Wallace, and Gene Stratton-Porter. In his Indiana through Tradition and Change, Madison noted that during this period numerous Indiana authors achieved popularity on a national scale, citing a Purdue University study that analyzed the top ten best-selling novels from 1900 to 1940. This study found that Indiana came in second place at 215 best-sellers, just behind New York’s 216. The New York Sun reported in 1902 that other states complained of “’partiality’ shown by critics” for Hoosier works and suggested that the “preference for the Hoosier school” was deserved.

Witnessing the transformation of his childhood city at the turn of the 19th century profoundly influenced Tarkington’s work. In 1921, a New York Times article summarized the theme of many Tarkington novels when it noted that Alice Adams was set “in one of those small Middle Western cities which were small towns only yesterday. As the small town progresses cityward, it is inevitable that there should be some who drop behind, unable for one reason or another to keep up with the procession.” A 1924 Current Opinion review of Tarkington’s The Midlander sought to analyze the author’s popularity, concluding that in the age of jazz and the flapper readers welcomed Tarkington’s depictions of simpler times. The review added that The Midlander “deals, in realistic manner but highly romantic spirit, with the life of the Middle West . . . it deals chiefly with a single period of that life, the period of the nineties, the period of Mr. Tarkington’s own youth. He is essentially and incorrigibly a late-Victorian.” Thomas Mallon aptly wrote in The Atlantic that “The automobile, whose production was centered in Indianapolis before World War I, became the snorting, belching villain that, along with soft coal, laid waste to Tarkington’s Edens.” With this industrialization came societal change, reflected in Tarkington’s Pulitzer Prize-winning The Magnificent Ambersons. An article for The Bookman noted that in Ambersons “Big business, giving wealth of the mushroom sort to men of otherwise uncouth and uncultured extraction, must of necessity do so at the expense of the older family of a medium size Indiana town.” Madison contended similarly that Tarkington’s later novels:

studied in masterful detail middle- and upper-class families facing change in their society. By the 1920s Tarkington was acutely sensitive to social and economic change, often implicitly and explicitly comparing the simpler, smaller, quasi-industrial town of post-Civil War Indianapolis to the rapidly growing, sometimes alien, and often smoky and congested post-World War I city.