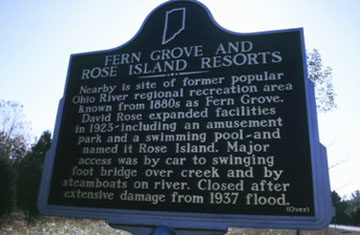 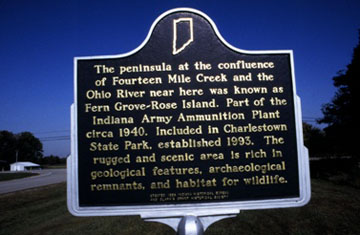 Nearby is site of former popular Ohio River regional recreation area known from 1880s as Fern Grove. David Rose expanded facilities in 1923-including an amusement park and a swimming pool-and named it Rose Island. Major access was by car to swinging foot bridge over creek and by steamboats on river. Closed after extensive damage from 1937 flood.

The peninsula at the confluence of Fourteen Mile Creek and the Ohio River near here was known as Fern Grove-Rose Island. Part of the Indiana Army Ammunition Plant circa 1940. Included in Charlestown State Park, established 1993. The rugged and scenic area is rich in geological features, archaeological remnants, and habitat for wildlife.