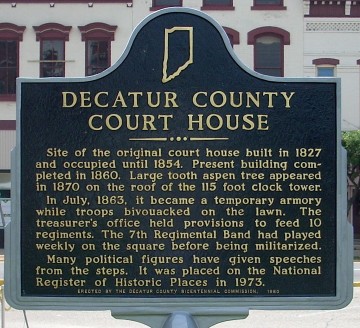 Site of the original court house built in 1827 and occupied until 1854. Present building completed in 1860. Large tooth aspen tree appeared in 1870 on the roof of the 115 foot clock tower. In July, 1863, it became a temporary armory while troops bivouacked on the lawn. The treasurer's office held provisions to feed 10 regiments. The 7th Regimental Band had played weekly on the square before being militarized. Many political figures have given speeches from the steps. It was placed on the National Register of Historic Places in 1973.