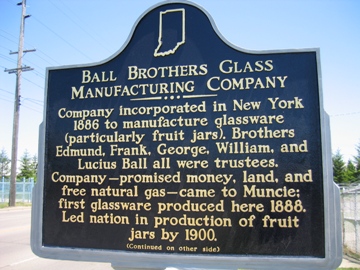 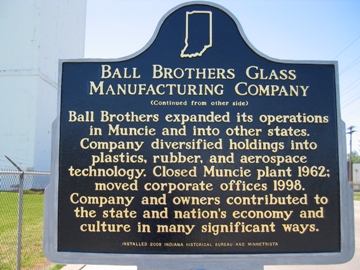 Ball Brothers expanded its operations in Muncie and into other states. Company diversified holdings into plastics, rubber, and aerospace technology.  Closed Muncie plant 1962; moved corporate offices 1998. Company and owners contributed to the state and nation's economy and culture in many significant ways.

Ball Brothers expanded its operations in Muncie(5)and into other states. Company diversified holdings into plastics, rubber, and aerospace technology. (6)(7) Closed Muncie plant(8)1962; moved corporate offices 1998.(9)Company and owners contributed to the state and nation's economy and culture in many significant ways.(10)

(2) Muncie Daily Times, August 1, 1887 (B060332). The report hails Ball Brothers' move to Muncie and the $100,000 payroll that the factory would generate. Muncie's gas field is identified as a major reason for the move. The report claimed that improvements and works for new factories now under contract will bring not less than $300,000 additional capital to Muncie in the next three months.

(10) Ball Teachers College, Bulletins, Vol. 1-4, 1925-1929, 11 (B060327). Ball Brothers offered to donate seventy acres of property they bought from the old Muncie National Institute to the Indiana Normal School in Terre Haute for the purpose of starting a branch in Muncie. Ten acres of the property had school buildings and a dorm while sixty acres were open to development. The Normal School trustees accepted the donation and classes started at the Indiana State Normal School, Eastern Division in the summer 1918 in Muncie.
On February 11, 1922, Ball Brothers announced more gifts. $250,000 to the Normal School (for a gymnasium and other capital projects), $100,000 to the Muncie YMCA, $100,000 to hospital extension work in Muncie, and $25,000 to the Delaware County Tuberculosis Association, and $1 million among various other Muncie charities. Indianapolis Star, February 12, 1922 (B060297).
As a result of the Ball's generosity, the board of trustees of the Normal School in May 1922 changed to name of the institution from Indiana State Normal School, Eastern Division, to Ball Teacher's College. Ball Teachers College, Bulletins, Vol. 1-4, 1925-1929, 11 (B060327).
On February 2, 1926, the Ball Brothers announced more donations to the community. Ball Brothers donated $1 million to Muncie for the erection and endowment of a general hospital and nurses home to be known as the Ball Memorial hospital. Ball Teacher's College received $150,000 for a girls dormitory from the Ball Brothers. Ball Brothers also contributed $500,000 to the Riley hospital for children in Indianapolis. Indianapolis Star, February 3, 1926 (B060298).
The donations made by the Ball Brothers, both the company and the brothers individually, were honored by the State of Indiana when Governor Harry G. Leslie approved a bill on March 7, 1929 that changed the name of the teacher's college in Muncie to Ball State Teachers College. (Laws of Indiana, 1929, 74-75 (B060300).
The name of the college in Muncie was changed once more on February 8, 1965 when Governor Roger D. Branigin approved legislation naming the institution Ball State University. Laws of Indiana, 1965, 2-3 (B0603001).