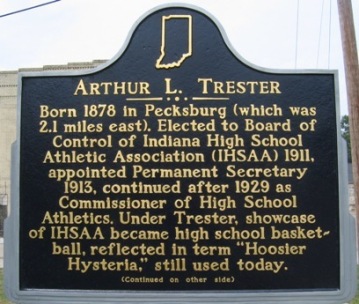 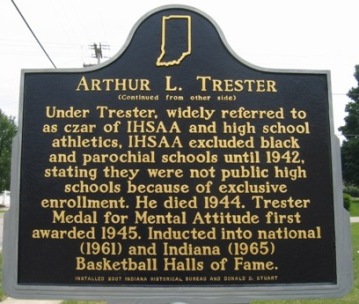 Under Trester, widely referred to as czar of IHSAA and high school athletics, IHSAA excluded black and parochial schools until 1942, stating they were not public high schools because of exclusive enrollment. He died 1944. Trester Medal for Mental Attitude first awarded 1945. Inducted into national (1961) and Indiana (1965) Basketball Halls of Fame.

Under Trester, widely referred to as czar of IHSAA and high school athletics,5 IHSAA excluded black and parochial schools until 1942, stating they were not public high schools because of exclusive enrollment.6 He died 1944.7 Trester Medal for Mental Attitude first awarded 1945.8 Inducted into national (1961) and Indiana (1965) Basketball Halls of Fame.9

Albert M. Trester purchased land on April 4, 1878, in Pecksburg, Hendricks County. Deed Record, Hendricks County, Book 53, October 17, 1879 - April 15, 1880; p. 581 (B050756). The Deed Record lists the purchase of land as follows: "A part of the Southwest quarter of Section 15, North of Range 1 West as follows: Beginning six rods North of the Northwest corner of Block 3 in the Town of Pecksburg at the Northwest corner of the Lutheran Church lot thence West 8 and 1/2 links: thence North 3 degrees East, 14 and 1/4 rods: thence East 6 rods: thence South 3 degrees West 14 and 1/4 rods: thence West with the North line of the Church lot 6 rods to the place of the beginning.  "This property description does not coordinate with the township, range, and section description for Pecksburg, SW 1/4 Section 31, Township 14N, Range 1W.

The following information is excerpted from the Indiana High School Athletic Association Membership History, 1-2 (B050011), outlining the formation and organization of the IHSAA.

"During the late 1800's, athletics were not a part of the secondary school program but were operated by non-school groups or organizations such as the YMCA. Students began forming athletic associations for recreation purposes. Students selected their own players and managers and scheduled their own games. Teams were associated by name with their high schools although schools assumed no responsibility for organizing and administering the program. However, being associated with schools by name caused some embarrassment when disputes or unfair competition arose."

"Eventually, school administrators across the nation decided to either eliminate athletic contests between schools or exercise responsibility and authority for regulating and controlling them"

"The first attempt to organize the high schools of Indiana into a single organization for the purpose of administering athletic activities was made in a meeting of the Northern Indiana Teachers' Association at Richmond, April 24, 1903."

"Principal J. B. Pearcy of Anderson issued a call for a meeting of high school principals interested in a state athletic organization for December 5, 1903. At this meeting, a provisional constitution was adopted. At a similar meeting on December 29, 1903, a final constitution was adopted and a Board of Control of three members was chosen to administer the affairs of the IHSAA."

"In the beginning, one member of the Board of Control served as Secretary, but it soon became very evident that this office furnished enough work for a special man. It was also seen that the future of the organization demanded that the office of Secretary be made more permanent than the office of Board Member. Accordingly, at the annual meeting in 1906, the office of Permanent Secretary was established."

"The Board of Control consisted of three members, chosen by the principals in their annual meetings, until the annual meeting of October 27, 1916. In 1916, the Board divided the state into five districts, each having one representative."

(4) Several excerpts from Dale Glenn, The History of the IHSAA (B050376), demonstrate the significance of high school basketball in Indiana, as well as Trester's contributions to the development of the IHSAA and its showcase sport.

At the conclusion of the 1925 state tournament, Dr. James Naismith of the University of Kansas and founder of the game presented awards to the winning team. In Spaulding's Basketball guide for 1925-26, Naismith stated:

"As a guest of the IHSAA, I had the opportunity to watch the effects of their state tourney. The possibilities of basketball as seen there were a revelation to me. The striking features were the grade of basketball, the splendid spirit of the players and the unbound enthusiasm of the 15, 000 spectators who crowded the Exposition Building. The work of Arthur Trester cannot be too highly commended, as it is showing results throughout the state" (74-75).

Dr. Walter E. Meanwell, the varsity basketball coach at the University of Wisconsin, stated in The Daily Cardinal after watching the same tourney:

"It was the greatest exhibition of athletics in the United States that I have ever seen. I wish our high school tourney could in any way compare with that one and hope the people support ours as the one I saw was supported. I went there expecting big things, but it astonished me." Ibid., (75).

Glenn asserts that, "The ascent of basketball in Indiana was not due to the state tourney alone. Hundreds of small towns took their teams to heart and let basketball become the center of community life on cold winter weekends." Ibid., 76.

With regard to the prominence of the IHSAA, Glenn states that, "The Association could never have dreamed of the enthusiasm that would surround the basketball tournament. Riding the crest of this contagion, the IHSAA grew and developed its organization to a new, higher lever of sophistication. State associations from around the nation looked to Indiana to see what the IHSAA was doing, and many modeled themselves after it, particularly after 1924 when the Association joined the National Federation of High School Athletic Associations." Ibid., 83. Glenn notes that "K.V. Ammerman of Manual High School and a Board president said, "We have given the state of Indiana the distinction of being the central figure of the entire United States in high school athletics.'" Ibid. , 85.

Over the years of Trester's tenure and after his death, others (in chronological order here) commented on the IHSAA, Trester, and "Hoosier Hysteria, " as the following sources indicate. "Basketball Is King of Indiana Sports, " The New York Times, March 27, 1932, p. E6, "High school basketball isn't a sport in Indiana; it is a mania which has transcended all other community ventures" (B050999).

The article "Hoosier Hysteria Can't Be Far Away, " appearing in both The Hartford Courant, and the Los Angeles Times (same article but titled "Fans Go Wild Over Basketball") on November 9, 1939, reports: "The annual season of Indiana insanity or Hoosier hysteria (basketball to the 47 other states) can't be far away" (B050998 [Courant]) (B050997 [Times]).

"Bill Fox Dies; Conductor of Shootin Em', " Chicago Tribune, May 15, 1964, p. C5, reports that William Francis [Bill] Fox Jr., sports editor of the Indianapolis News, "was a major factor in making high school basketball Indiana's leading sport thru his column, Shootin Em.' He coined the name for what it grew to become, 'Hoosier Hysteria.' In later years, the Indiana High School association presented him with a lifetime official's card as the one who has contributed more than any other one person to the growth of Indiana high school basketball'" (B050995).

Glenn, The History of the IHSAA (B050376), describes how the press contributed to Trester's reputation as the "czar" of Indiana high school athletics. Citing Trester's wife, Glenn writes: "William F. Fox, Jr., the Sports Editor of the Indianapolis News would refer in print to the IHSAA as the 'Tower of Trester, ' and once ran a cartoon of Trester sitting on top of the world in a straight back chair with his arms folded. Below it were the words "King Arthur" (132). There is a picture of the cartoon on page 137.

Glenn also asserts that "The press had fun at Trester's expense but still had great respect and admiration for the man who was often called 'Mr. IHSAA.' Even those who were on the inside in the IHSAA said he was a 'czar' who controlled the Board, but they also said that the Association needed a man like that in those years." (136)

Historian James H. Madison noted that "Commissioner Trester made strenuous efforts to keep Indiana basketball a fair and competitive sport for amateurs. His sometimes high-handed methods, however, earned the enmity of the press, which joined others' especially blacks protesting the exclusion of black schools ”in unsuccessful attempts to shift control of athletics from the IHSAA to a state government agency." James H. Madison, Indiana Through Tradition and Change: A History of the Hoosier State and Its People, 1920-1945 (Indianapolis, 1982), 342 (B050556).

Limited membership to IHSAA could be given to "colored High Schools desiring to join the I.H.S.A.A. with the understanding that limited memberships shall extend to colored High Schools the privilege of participating in single athletic games." The state tournament was off-limits. Black schools could not participate in "meets and tourneys in which more than two teams participate except in meets and tourneys in which only the teams from the High Schools of the same city participate." The Indiana High School Athletic Association Twenty-Eighth Annual Handbook and Report of the Board of Control, 1931, p. 146 (B050790).

"Tough 15-Year Battle Won Membership in IHSAA, " The Indianapolis Recorder, April 9, 1955, p. 11 (B050594) noted that "Trester said the by-laws of the Association stated no all-Negro or parochial school could be accepted as a member."

"Crispus Attucks through the Years, " Indianapolis Star, February 27, 2005 (B050629) stated: "Trester denies Attucks membership, ruling that, because it does not include white students, it is not a public school."

Madison, Indiana Through Tradition and Change, 341 (B050556) states: "Like other features of the society, basketball reflected social distinctions of race, sex, and religion. The Indiana high school basketball tournament was for males, most of whom were white and Protestant. Black high schools such as Crispus Attucks in Indianapolis and Roosevelt in Gary were not allowed to join the IHSAA and not allowed to enter the tournament. Their teams traveled to other black schools, often out of state, and to Catholic high schools. Catholic schools also were denied entry in the IHSAA and founded their own state athletic association and basketball tournament. . . . Girls had far fewer opportunities to play basketball than boys. Only about fifty high schools had girls' teams that played other schools, and there was no state tournament."

"In 1917 Jake Gimbel of Vincennes presented to the I.H.S.A.A. Board of Control a proposal to give a prize each year at the State Basketball tourney to the boy among the teams represented that showed the best mental attitude throughout the tourney. Mr. Gimbel did not have in mind the quality of the playing of any boy on any team, but did have in mind the qualities that belong to a real gentleman. The Board of Control accepted the proposal of Mr. Gimbel and the awarding of this prize known as the 'Gimbel Prize for Mental Attitude' has been an annual affair, calling for much favorable comment."