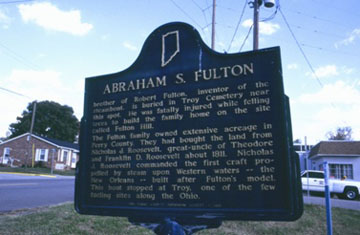 brother of Robert Fulton, inventor of the steamboat, is buried in Troy Cemetery near this spot. He was fatally injured while felling trees to build the family home on the site called Fulton Hill. The Fulton family owned extensive acreage in Perry County. They had bought the land from Nicholas J. Roosevelt, great-uncle of Theodore and Franklin D. Roosevelt about 1811. Nicholas J. Roosevelt commanded the first craft propelled by steam upon Western waters --the New Orleans -- built after Fulton's model. This boat stopped at Troy, one of the few fueling sites along the Ohio.