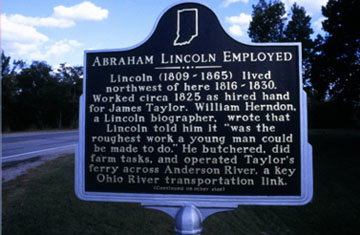 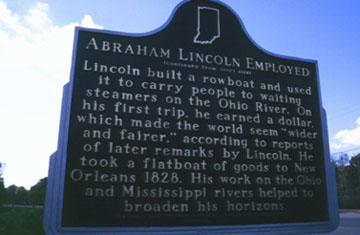 Learn more about Lincoln's youth and work in Indiana.

Listen to the Talking Hoosier History podcast to learn more about "the boy, the man, and the myth."

Lincoln (1809-1865) lived northwest of here 1816-1830. Worked circa 1825 as hired hand for James Taylor. William Herndon, a Lincoln biographer, wrote that Lincoln told him it "was the roughest work a young man could be made to do." He butchered, did farm tasks, and operated Taylor's ferry across Anderson River, a key Ohio River transportation link.

Lincoln built a rowboat and used it to carry people to waiting steamers on the Ohio River. On his first trip, he earned a dollar, which made the world seem "wider and fairer, " according to reports of later remarks by Lincoln. He took a flatboat of goods to New Orleans 1828. His work on the Ohio and Mississippi rivers helped to broaden his horizons.