Last month we began exploring the origins of Indiana’s state park system and some of the key individuals who helped make the movement for state parks a reality. Among those mentioned was popular columnist Juliet Strauss, known colloquially as “The Country Contributor.” As we mentioned in our March post, Strauss worked alongside Richard Lieber and others as part of the State Park Memorial Committee of the Indiana Historical Commission. While this committee was formally organized in early 1916, it is important to note that Strauss’s efforts to preserve Indiana’s natural environment actually commenced almost a full year earlier. 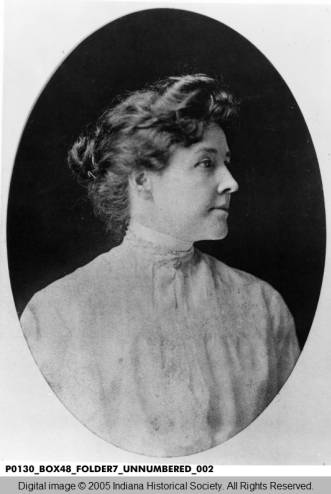 In the spring of 1915, Strauss began working to bring attention to, and protect, an old-growth forest in Parke County known as Turkey Run. Previously owned for several decades by the Lusk family, and traversed by numerous tourists and campers, the area became endangered in 1915 when John Lusk, the last surviving member, died and left behind no will. Thanks to Strauss’s efforts, and the work of others from the Indiana Federation of Clubs, Governor Samuel Ralston appointed a Turkey Run Commission on April 27, 1915, to examine the area and determine what could be done to save it from deterioration and desecration. This commission included William Watson Woollen of Indianapolis, Vida Newsome of Columbus, and fittingly, Juliet [Strauss] of Rockville. 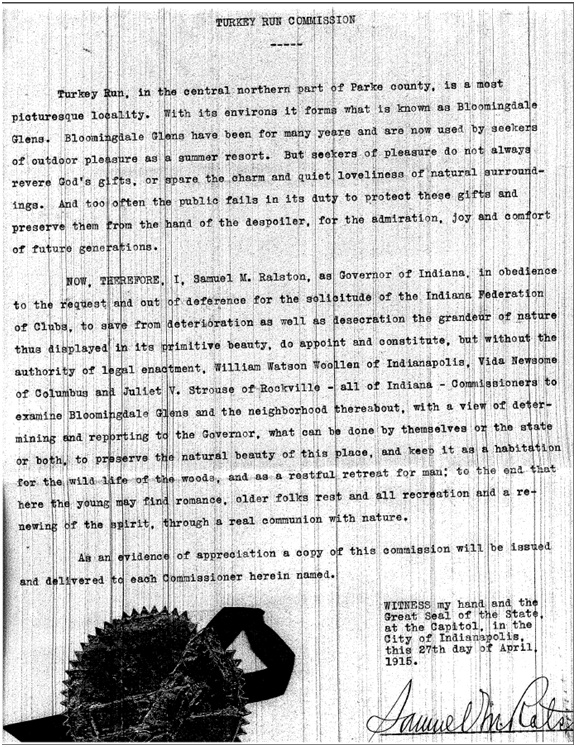 The Turkey Run Commission worked throughout the year to survey the expansive tract of land. In January 1916, Governor Ralston appointed Lieber to the commission, and soon after, the group merged with the State Park Memorial Committee. On February 4, 1916, the Indianapolis News reported that Turkey Run would be advertised for sale in May by order of the Parke County circuit court, thus leaving the fate of the area unknown. Almost immediately, the State Park Memorial Committee committed itself to purchasing the land and establishing Turkey Run as the “nucleus for a State-wide park system” (Juliet V. Strauss, “Squibs and Sayings,” Rockville Tribune, March 7, 1916, p. 5). Unfortunately, the Committee lacked the funds to do so. Because the legislature had not appropriated funds for the purchase, money would have to be raised through public subscription if Turkey Run was to be saved.

Throughout March and April 1916, Strauss used her columns in the Indianapolis News and the Rockville Tribune to rally men and women across the state to the cause. She excited readers by describing the beauty of the area and its importance not only to Parke County residents, but to the state as a whole. According to Strauss, Hoosiers owed it to their children and their children’s children to do what they could to help save Turkey Run. 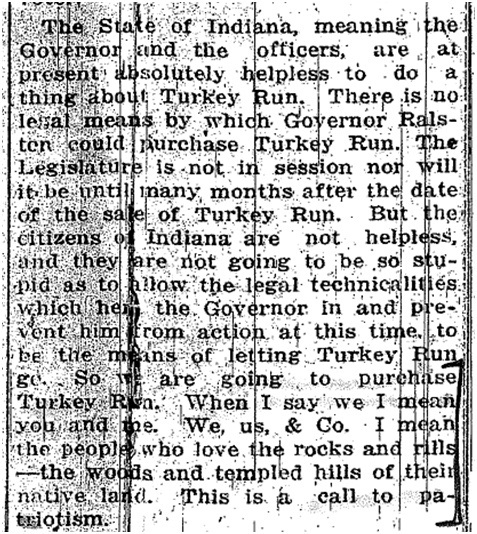 The State Park Memorial Committee collected over $20,000 by the time fundraising was complete, a clear indication of how much Hoosiers valued both the land and the creation of a system of state parks. However, it unfortunately was not enough. On the day of the auction, the Hoosier Veneer Company outbid the State Park Memorial Committee and purchased Turkey Run for $30,200.

The Committee refused to give up and quickly began negotiating with the Hoosier Veneer Company. During these negotiations, committee members learned that McCormick’s Creek Canyon in Owen County was to be sold at auction. With help from citizens there, the Committee purchased the land, giving McCormick’s Creek Canyon the distinction of being Indiana’s first state park. Turkey Run followed soon after. On November 11, 1916, the State Park Memorial Committee purchased it from the Hoosier Veneer Company for $40,200. The first links in Indiana’s state park system were in place.