Mason Currey author of the book Daily Rituals: How Artists Work and a related blog, provides profiles of creative people and a glimpse into how they organize their day.  He has shared the schedules of such disparate characters as Benjamin Franklin, Karl Marx, Maya Angelou, and Willem de Kooning. Recently, while researching the life of the Indiana artist, Theodore Clement Steele, for a forthcoming state historical marker, I ran across the artist’s 1871 schedule for working in his journal – rather his resolution for a schedule – and was inspired by Currey’s collection to share. 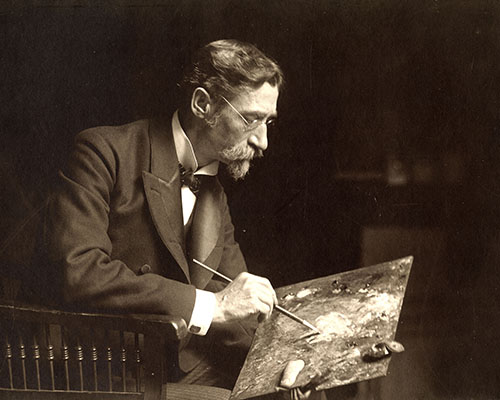 In the 1870s, Steele was working as a portrait painter and was unknown outside of the small art community in Indiana. However, his journal shows that he had already resolved to become a great artist, to study in Europe, and to master the landscape. He would go on to accomplish all of these things. However, on New Years Day in 1871, Steele resolved to get out of the rut he was in and recognized that his lofty goals would require great effort. He wrote: “So I may expect neither ease nor pleasure in carrying into effect some of my resolutions as they will necessitate change of habits both in thought and action.” He continued with his proposed schedule:

I shall make it a rule to retire early, say 9 to 9 ½ o’clock and rise early say 6 o’clock. From this time till 8 ½ I shall devote excercize [sic], breakfast and the doing of necessary chores. At 8 ½ o’clock I shall commence my painting. This will be imperative except upon the most extraordinary occasions. I should be able to give from this time untill [sic] 4 in the afternoon excepting an hour at dinner, to my Art. Then will come two hours or so of exercize and out of door recreation. This latter is also imperative, for without so much exercize I can not have the strength nor health necessary for so many hours of painting. As to my evenings, I think it best not to devote them to drawing or painting, but to conversation Reading &c, things that may be considered help to Art. Other things being equal more intellectual labor can be performed in the fresh morning hours than in double the time in the evening.

Steele may very well have stuck to his schedule because he became one of the most influential of the Indiana artists known as the Hoosier Group as well as a master of landscape. By the time he returned to Indianapolis from studying abroad in 1885, at this point married with several children, his schedule looked much like his 1871 resolution: a day of work followed by an evening of other cultural pursuits. His daughter Daisy recalled the days spent at what she called the “Tinker Place” between Talbott and Pennsylvania Avenues:

Father and Mother were both exceedingly fond of music . . . One of my sweetest memories is hearing Mother play Handel’s Largo in the evening hours before the lamps were lit. Mother loved the twilight and when it became too dark for Father to work in the studio it was his habit to come to the living room to listen to her or sit with her before the open fire, talking quietly or meditating . . . After the evening meal, Father always read to us . . . I do not know whether Father chose books that were particularly musical in their diction or whether it was his own rich intonation that made his reading so melodious. But I do know that I looked forward to the music of his voice as much as to hearing the contents of the book . . . After reading it was Father’s custom to bring to the living room the pictures upon which he had worked during the day. These he studied by lamplight, sometimes humming or whistling as he tried them in different lights. Studying the day’s work before he went to bed was a habit I think Father kept up as long as he lived.

Steele’s home and studio, described by his daughter Daisy, became the first home of the John Herron Art Institute by 1902.  Check back for related posts! 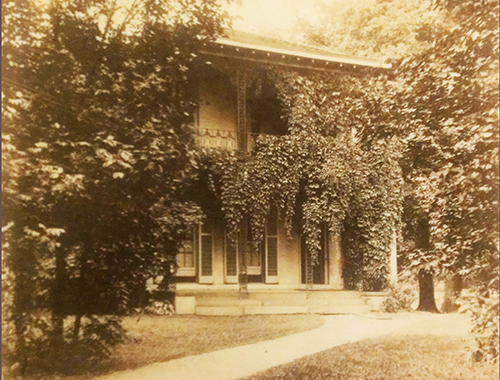