Help the “Queen of American Agriculture” Receive the Recognition She Deserves

UPDATE: We did it!  You can see the marker here. 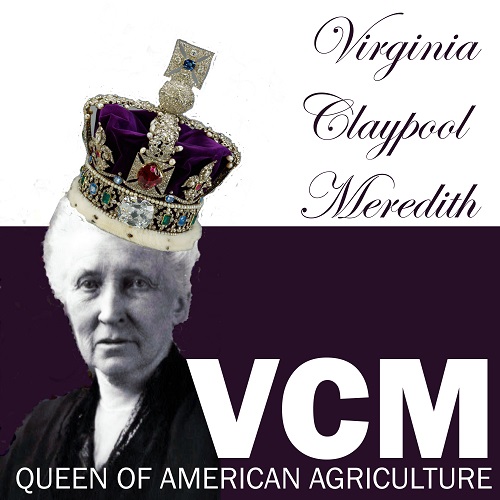 We need your help to mark an important Indiana women’s history topic! We have a thoroughly researched orphan marker ready to be manufactured and installed – as soon as we raise the necessary funds.

In 2009, the Indiana Historical Bureau received an historical marker application for Virginia Claypool Meredith, a Cambridge City resident born 1848, who achieved success in agriculture and stockbreeding, grew her renown through a successful writing and lecturing career starting in the 1880s, and cemented her place in Indiana history when she became Purdue University’s first female trustee in 1921.

Unfortunately, after this marker topic was thoroughly researched, and the text written and approved by the Indiana Library and Historical Board, the applicant was unable to find funding.  This year, however, marker champions and Cambridge City residents Jerry and Phyllis Mattheis, along with Centerville resident Dr. Ron Morris, are rallying people to place this important marker near Meredith’s farm and home in the heart of Cambridge City.  The Indiana Women’s History Association, Western Wayne Heritage, and the National Road Association have pledged their support, but your help is also needed!

As a writer, speaker, stockbreeder, and university professor, Meredith (born 1848) encouraged women to pursue education and careers related to farm life. She inherited Oakland Farm, three blocks south, 1882. Successfully grew business and reputation as farm expert. Appointed to 1893 World’s Fair Board of Lady Managers. She was known as “Queen of American Agriculture.”

By 1880s, Meredith promoted advancement of farm women to an international audience through speeches for farmers’ institutes and women’s clubs, and in publications, including Breeders’ Gazette. She led efforts to establish home economics science education at University of Minnesota and Purdue University. First female Purdue Trustee, 1921, she served until death, 1936.