As part of the commemoration of the 150th anniversary of Lincoln’s death and funeral train journey, IHB asked for submissions of primary sources showing the reactions of Hoosiers from across the state to the events of April and May 1865. 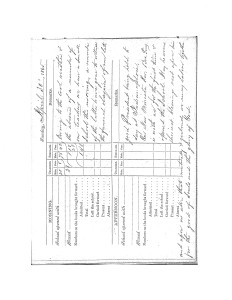 This week’s “Primary Source” draws on a page of a “Sunday School Record Book” from an Evansville church, contributed by William E. Bartelt, author and retired teacher from Harrison High School (Evansville) and the University of Southern Indiana. Bartelt has also served as a research consultant and park ranger; He serves on the Board of the Indiana Historical Society and the Indiana Library and Historical Board, which governs the Indiana State Library and the Indiana Historical Bureau. You can purchase his recent book, There I Grew Up: Remembering Abraham Lincoln’s Indiana Youth, at our book shop.

The “Sunday School Record Book” was kept by the Locust Street Methodist Episcopal Church (now the Trinity United Methodist Church) in Evansville. On April 30, 1865, the record book reported: “Owing to the cool weather & the absence of a number of our teachers we have a small School this morning. A number of the latter have gone to witness the funeral obsequies of our late good President being held to day [sic] at Indianapolis.”

According to the Indianapolis newspapers, Sunday Schools across the state attended the funeral in mass.  The Indianapolis Daily Journal reported on May 1, 1865:

“The Sabbath Schools turned out in force. As near as we could estimate their numbers between four and five thousand scholars visited the State House. The published order of the procession was pretty generally observed among the different schools.”

The Indianapolis Daily Gazette reported on the same day:

“As soon as the soldiers had all passed, the column of Sunday School children entered the Hall. To enable the children to see the remains a platform with inclined ends was laid down on either side of them and they passed through the rotunda four abreast. In the mean time it had been raining steadily and the immense crowd of women and men in the streets fell into line with the schools and passed through the State House in a rapid stream. We timed the procession at various times, and the lowest number passing in a minute was 104, when the schools first began to go through and before the marshals had got the hang of crowding them. After the little folk had got through, and the crowd was mostly of men it passed through at the rate of 140 per minute. From twenty minutes before 9 when the schools first began to go through, until 4 o’clock the stream of anxious spectators was continuous and 60,000 persons passed the rotunda which with the troops who had passed through before and those who came in after that hour made not less than 75,000 persons who visited the remains in this city.”