The following is a transcription of the Indianapolis Daily Journal’s May 1, 1865 coverage of the funeral train and the Indianapolis funeral.  This is the most lengthy and detailed description of these events that was located by IHB staff.  The article reports in-depth on the train stops, the city’s decorations, the hearse, coffin, State House display and decorations, the names of the Guard of Honor, distinguished visitors, music played, and more.  (For a brief overview of this topic see Lincoln Funeral Train Part One: Washington D. C. to Indianapolis.) 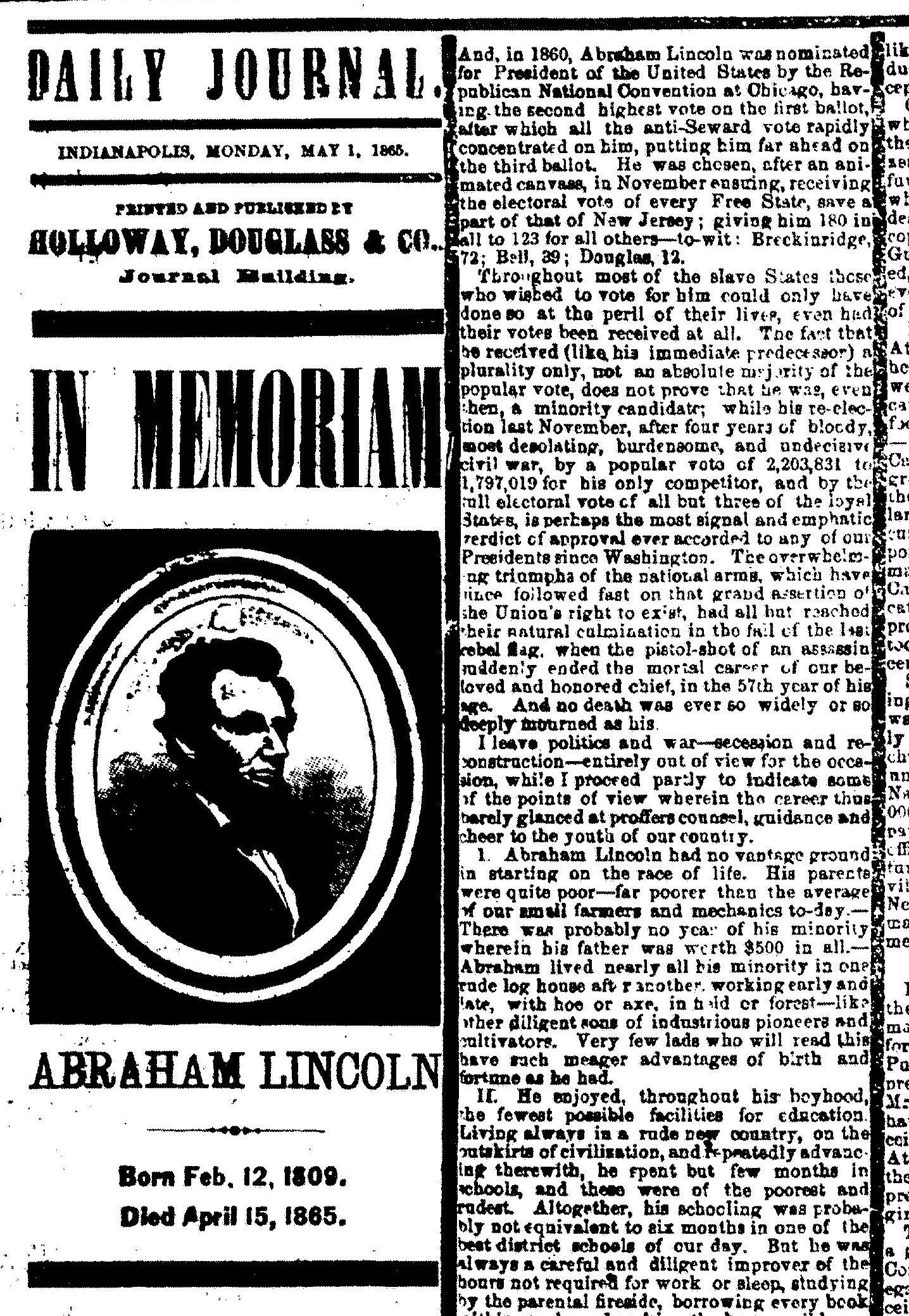 The Coffin.
The coffin is got up on a scale of unsurpassed magnificence and grandeur. Its entire cost has been about $2,000, and it is undoubtedly the most beautiful thing of the kind ever manufactured in this country. The timber used in the construction is mahogany, which is also lined with lead. The inside of the coffin is lined with box-plaited satin, the pillow and lower surface is of the finest description of white silk, and the whole is surrounded with chenille, as in fringe. The inside of the face lid is raised with white satin, the center piece is trimmed with black and white silk braid, fastened at the four corners with silver stars. The upper third of the lid is thrown back so as to reveal the head and bust.
The most rich and costly [?] of black cloth covers the outside. It is heavily fringed with silver, having four silver medallions on either side in which are set the handles. All along the sides it is festooned with massive silver tacks, repre[?] drapery, in each fold of which glitters a silver star. The edges are decorated with silver braid, having tassels each five inches in length. Upon each side are four massive handles, also of silver, and at the head and foot are stars of the same material. On the top is a row of silver tacks, extending the whole length a few inches from the edge. In the center is a silver plate, on which is the inscription,
ABRAHAM LINCOLN
Sixteenth President of the United States.
Born July 12, 1809,
Died April 15, 1865.
This is encircled by a shield formed of silver tacks. The whole thing is really beautiful, and finished with exceedingly good taste and fine workmanship.