The funeral train left Indianapolis at midnight on May 1.  (See Part One for information on the trip from Washington D. C. to Indianapolis).  It passed through Augusta, Zionsville, Whitestown, Lebanon, Hazelrigg, Thorntown, Colfax. and Stockwell, before reaching Lafayette. The New York Semi-Weekly Times reported on the trip through these towns. “These are small places, but it seems the inhabitants are on the roadside. Some of them hold torches in their hands, and the surroundings are solemnly lighted. Men stand with uncovered heads as the train hurries on its way.”  The paper continued to describe the gathering at Whitestown:”At least two hundred persons, including a number of young ladies, are drawn up in a line. The latter are dressed in white, with black sashes. Large bonfires are burning in the drizzling rain.” At Lebanon the residents “hung over the track, suspended from two uprights, a hundred variegated Chinese lanterns.” 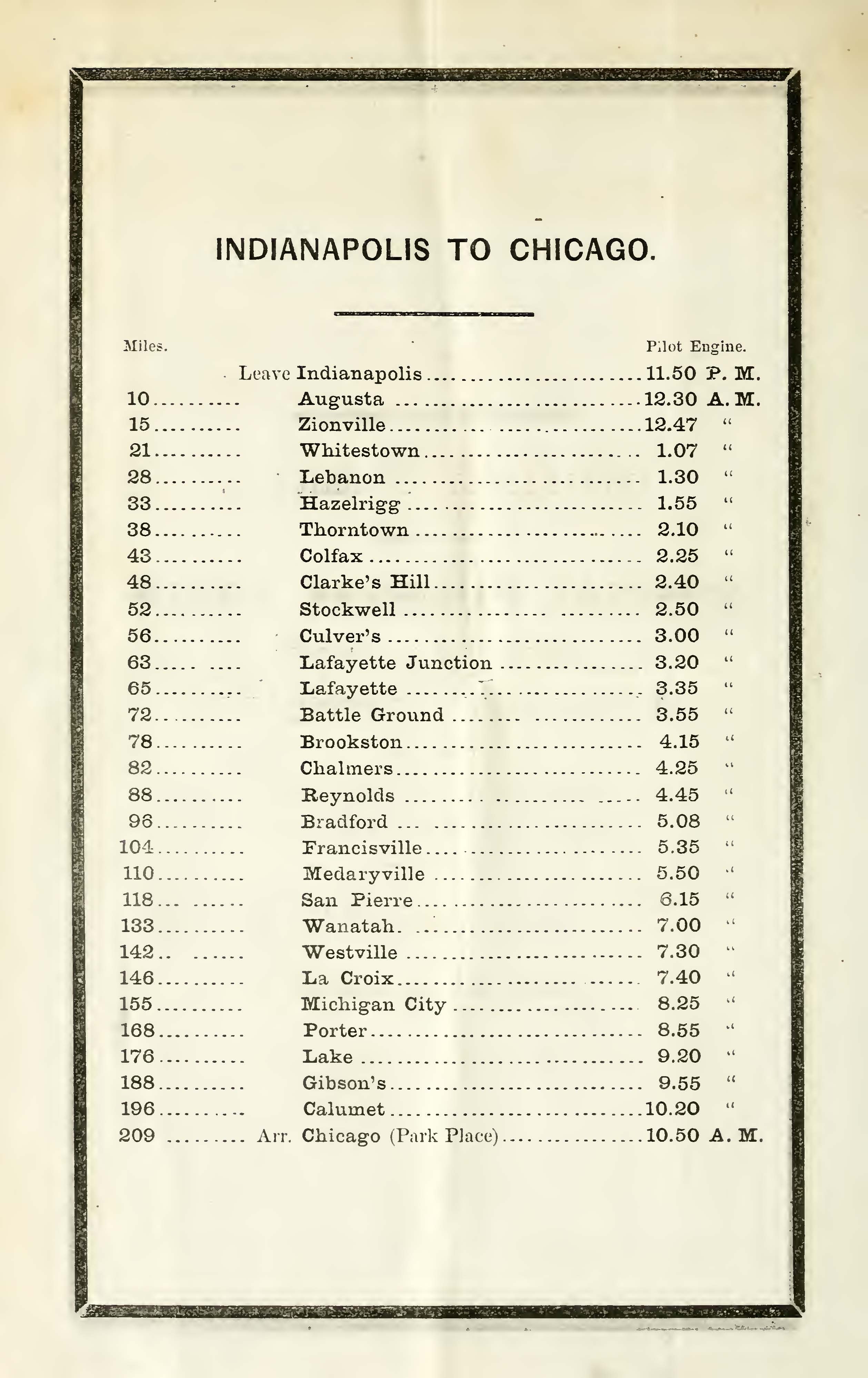 The train reached Lafayette at 3:35 a.m. The Indianapolis Daily Journal reported on the scene at Lafayette: “The houses on each side of the railroad is [sic] illuminated, and; as elsewhere, badges of mourning and draped flags are displayed; bonfires are blazing and bells tolling; mournful strains of music are heard, and the people are assembled at all the stations to view the train.” After leaving Lafayette, the train traveled through Tippecanoe Battle Ground, Brookston, Chalmer, Reynolds, Bradford, Francisville, Medaryville, Kankakee, La Crosse, Wanatha, Westville, and Lacroix.

The train reached Michigan City at 8:25 a.m.  The Indianapolis Daily Journal reported: “The train stopped under a large and beautiful temporary structure, trimmed with black and white and ornamented with evergreens and choice flowers.”  The New York Semi-Weekly Times reported that the structure was twelve feet wide and fourteen feet high with gothic arches soaring 35 feet above the ground.  The arches were decorated with black and white fabric, evergreens, and flowers. Over each arch were the words “Abraham Lincoln” and a motto.  These included, “Our guiding star has fallen,” “The nation mourns,” and “Though dead he yet speaketh.” Young women sang the hymn “Old Hundred.”  The Times reported, “Many persons are affected to tears.” The paper concluded its description of the Michigan City stop: “Meantime, guns are fired, and the subduing strains of music are heard. The scene is gilded by an unclouded sun.”  The Chicago Tribune reported that the morning was “clear and beautiful.” Finally, it had stopped raining. 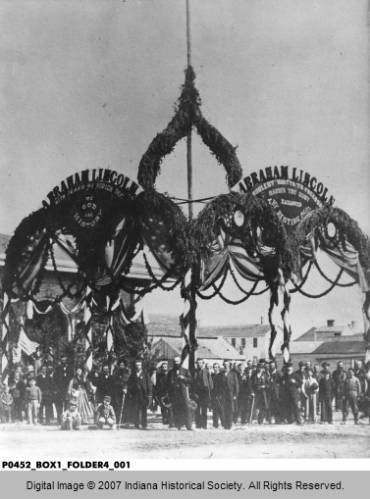 At the same time, Michigan City hosted a breakfast for the members of the funeral party, local officials, and the Chicago Citizens Committee of 100 which was planning the funeral events to take place in Chicago.  Members of the Committee, which included Speaker of the U.S. House of Representatives, Schuyler Colfax, had taken a train from Chicago to Michigan City to meet the funeral train.

According to the Chicago Tribune, “In the main station house a substantial breakfast awaited the party of the funeral cortege. An opportunity during the brief period of the stay at Michigan City, allowed several hundred of the ladies to pass through the funeral car and look upon the coffin enclosing the honored dead.”

Around 9:15 a whistle sounded and the train departed the crowded depot. (Some sources state that the train left Michigan City around 8:35, but dispatches from those riding on the train show this is incorrect). The Tribune continued, “The crowd surrounding the depot was immense. They lined the track for a long distance until the train had left the suburbs of the city.  All was decorum, the whole reflecting the highest credit upon the patriotism of Northern Indiana.”

An extensive file of primary sources on the Lincoln Funeral Train is available for researchers at the Indiana Historical Bureau. More information on the Indiana stops in Indianapolis and Michigan City can be found through the text of two state historical markers, one in Michigan City and one in Indianapolis. (Even more information on these Indiana stops can be found in the footnotes of the markers, available online.)