By the time the Indiana Supreme Court met June 20, 1865, the nation had been mourning the death of President Lincoln for two months. Hoosiers watched as the funeral train passed through their state, and many thousands attended the funeral in Indianapolis. They read long and detailed newspaper accounts of the burial in Springfield and then did their best to return to their daily lives. However, a look at the court proceedings shows that many people’s thoughts, including those of the state’s leaders, were still on Lincoln’s passing two months later.

At the opening of the Indiana Supreme Court session on the morning of June 20, 1865, a committee presented three resolutions to the court regarding the death of President Lincoln. These resolutions, which were adopted, stated in short: 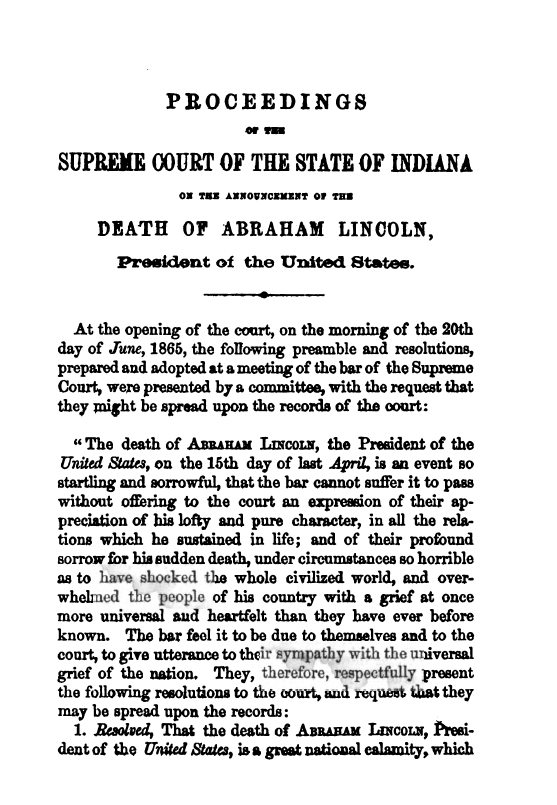 Proceedings of the Supreme Court of the State of Indiana on the Announcement of the Death of Abraham Lincoln, President of the United States,” June 20, 1865.

After the resolutions, the court heard from Supreme Court Justice James Frazer, who had “a slight personal acquaintance with Mr. Lincoln, before his first nomination for the presidency.” Frazer stated that it was apparent to him, even then, that Lincoln was “the fittest man in the nation for that high office, during that crisis of our national affairs which, it was apparent, could not be much longer delayed.” 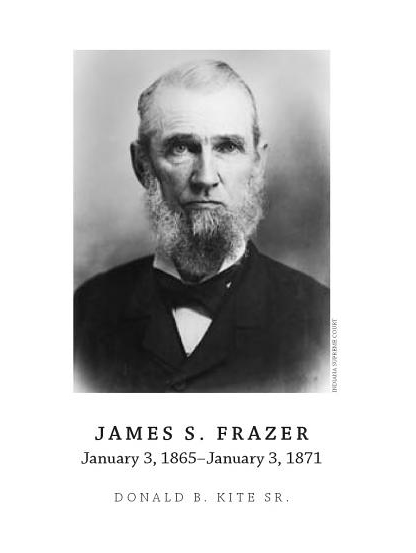 Frazer attributed much of Lincoln’s leadership success to his honesty, simplicity, kindness, and ability to connect with common people. It was these personality traits that, according to Frazer, “enabled him to discharge unpleasant duties without giving pain or offense, and to unite the country in executing measures now seen to have been wise and necessary, but which, at the time, did not fully meet the general approbation.” However, Frazer stated, the quality for which “history will distinguish him” was his intellect. The justice stated that Lincoln’s intellect was displayed fully in his speeches and writings. Frazer praised Lincoln’s ability to “strip a subject of everything which did not belong to it, and then discuss the subject itself with so much clearness, and exhaust it with so much brevity.” The court then adjourned “out of respect to the memory of the deceased Chief Magistrate of the nation.”

Read the entire, “Proceedings of the Supreme Court of the State of Indiana on the Announcement of the Death of Abraham Lincoln, President of the United States,” at Google Books. It is also available in the compilation of memorials given by the Supreme Court: Wendy L. Adams and Elizabeth R. Osborn eds., In Memoriam: Glimpses from Indiana’s Legal Past (Indianapolis: Indiana Supreme Court, 2006). In the introduction to the work, former Chief Justice Randall T. Shepard explains: “Sprinkled throughout the several hundred volumes of reported Indiana appellate decisions are score of entries labeled ‘In Memoriam.’ Similar to an obituary, an In Memoriam honors a public figure at death. It memorializes the deceased’s deeds and accomplishments throughout his or her lifetime.” In Memoriam is available in the IHB Book Shop. Learn more about Indiana’s Supreme Court justices: Linda C. Gugin and James E. St. Clair, eds., Justices of the Indiana Supreme Court (Indianapolis: Indiana Historical Society, 2010), also available at the IHB Book Shop.