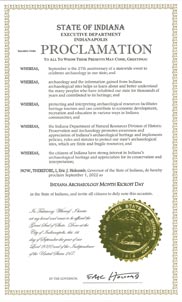 September is Indiana Archaeology Month. The Division of Historic Preservation & Archaeology (DHPA) coordinates the event to encourage learning about Indiana archaeology. Universities, museums, organizations, and individuals throughout the state host a variety of programs.  These can include archaeological laboratory open houses, artifact identifications, lectures on archaeological topics, archaeological excavations, and more.

Archaeology Month helps Hoosiers learn more about the discipline of archaeology, Indiana archaeological sites, and laws protecting those sites.  A goal of this month is to increase public awareness and to minimize myths and misconceptions commonly associated with the science. 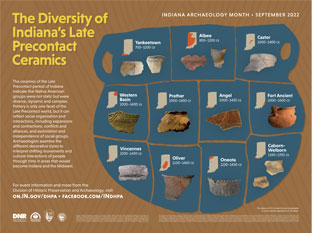 The 2022 Indiana Archaeology Month poster focuses on the diversity of Indiana’s Late Precontact ceramics. The ceramics of the Late Precontact period (1000 to 1500 CE) of Indiana indicate that Native American groups were not static but were diverse, dynamic, and complex.  (The dates for CE [Current Era] are comparable to, and a secular equivalent of, AD dates.) Pottery is only one facet of the Late Precontact world, but it can reflect social organization and interactions, including expansions and contractions, conflicts and alliances, and assimilation and independence of social groups. Archaeologists examine the different decorative styles to interpret shifting movements and cultural interactions of people through time in areas that would become Indiana and the Midwest.

This year’s design highlights examples of sherds from the Late Precontact period, and the maps indicate where within the state these ceramics generally manifest. Pottery vessels were used for cooking, serving, and storing food. The widespread adoption of pottery in the precontact record occurs approximately 2,800 years ago when people became more stationary for longer periods of time. By the Late Precontact period, ceramic manufacture had evolved, and some of the highest quality pottery with the most complex decorations occur during this time. However, precontact pottery can be fragile and is often identified from archaeological contexts as broken sherds.

Free commemorative posters (folded and unfolded) may be obtained in person at the DNR Customer Service Center in the Indiana Government Center South, Indianapolis.  Hours are 8:30am – 4:00 pm, M-F.  When attending Archaeology Month events, DHPA staff will also bring posters to distribute.  Requests for folded posters (limit of 5 per person) to be mailed may be sent to ajohnson@dnr.IN.gov.

Choose a period on the poster and then find its description below to learn more.

The Division of Historic Preservation and Archaeology will produce and distribute a press release regarding Indiana Archaeology Month. Other avenues of publicity utilized by the DHPA include:  e-mail, the DHPA and DNR Facebook pages, and Preservation at the Crossroads- DHPA's e-newsletter.

The DHPA Calendar of Events webpage will post the complete calendar of events taking place around the state. Event hosts may refer the public to this page for information about the Month.

Event hosts are encouraged to cultivate as much local publicity for their events as possible. We suggest contacting local papers, radio stations, etc. for possible advertising options.

The DHPA has many educational materials available free of charge. If event hosts wish to have any of these items to help with publicity, or to hand out during the event, feel free to download as many as you like. Postage costs will be charged if physical copies are needed. Payment must be received prior to mailing any items.

If possible, we request that after Archaeology Month, event hosts provide the Division with summary information regarding their events. Information such as attendance numbers, comments regarding activities, suggestions for future events, etc. is very helpful for the Division staff to learn about and improve upon the continuing successes of Indiana Archaeology Month and public archaeology outreach.