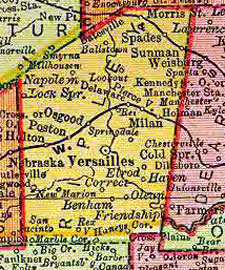 Ripley County, named for General Eleazer Ripley who served as an officer in the War of 1812, was organized in 1817. The village of Versailes was formally laid out in 1819. Versailes, the county seat, became a prominent community in frontier Indiana. The construction of the railroad through Ripley County led many area communities to become major commercial centers. Ripley County was active in the Underground Railroad during the Civil War. Osgood, Olean, Delaware, and Napolean were some of the communities known to sponsor "stations" along the Underground Railroad. 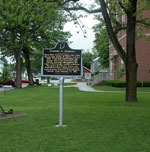 Stephen Harding moved to Ripley County in 1820. He was an active abolitionist, giving speeches in the area against slavery. He was active in the Liberty Party, a political party organized to elect anti-slavery politicians into office. While we have not evidence as an active participant in the UGRR, his political work and outspoken opinions helped bring about change.

The Story of James Harrison Cravens

A well-known debater, he opposed extension of slavery, 1850 Fugitive Slave Act requiring citizens to return escaping slaves to their owners, and Article 13 of 1851 Constitution prohibiting blacks from moving into Indiana. Served briefly in Civil War. Moved to Osgood area before 1860; built home here circa 1865. Died at Osgood December 4, 1876. (Read the complete story)

The Story of Union Church in Ripley County

In August 12, 1843, the Union Church organized as Freewill Baptist church at home of Harvey Marshall. Church covenant states: “We cannot receive slaveholders into the church nor those who believe that slavery is right.” First church building completed 1859 near here. In 1914, members changed denomination and name of church. New church built here 1921. Strong anti-slavery stance of Freewill Baptist churches contributed to end of slavery and freedom for those enslaved. Harding was an early leader in the opposition to slavery, helping to bring freedom to enslaved people in U.S. (Read the complete story)