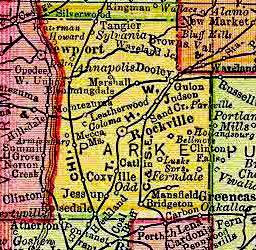 Parke County was organized in 1821, named in honor of Benjamin Parke, the first member of Congress for the territory.

The State of Indiana indicted Albert Coffin, William Morris, James Steel, James Siler and Horace Cannon on the charge of harboring a Negro in April of 1847. The State later dropped the charges against Coffin, Morris, and Steele. Siler was tried, but found not guilty. Cannon was found guilty and assessed a fine of ten dollars. Although free of charges, Steel was fined $25 for failure to appear to answer the indictment.