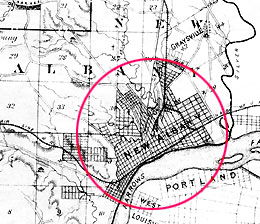 New Albany, located on the Ohio River in southern Indiana, was one of the earliest settled areas in the state. New Albany was founded in 1813 and the heavy traffic along the Ohio River ensured the towns commercial success. The riverfront town's economy was largely based on shipping and steamboat building, however as Indiana grew more settled New Albany became an important agricultural market. New Albany was active in the Underground Railroad before the Civil War and many slaves crossed over the Ohio River and continued their trek northward from the town.

The Bethel African Methodist Episcopal church in New Albany was started in c.1840 by Bishop Paul Quinn. The AME church in West Union (today known as Bethel) experienced some violence against it in the 1840s and 1850s--a fire in 1841 and a shooting incident in 1850, for example. The newspaper chided the Blacks that "if they would stop harboring people who were not supposed to be here (meaning on Indiana soil) we would all get along peaceably and well." The original AME church in West Union has been gone for a long time. The present Bethel congregation, however, is still active and worships close to the river in an antebellum Methodist church they purchased after the Civil War.