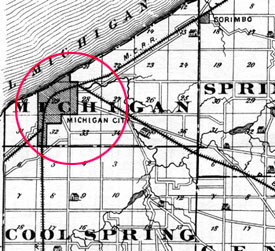 Michigan City, located in northern Indiana on the shores of Lake Michigan, was a major grain port for Indiana farmers in 1840s. By 1852, the Michigan Central Railroad linked the town to eastern markets bringing major industry to the town. Some Michigan City citizens of this era offered aid to slaves escaping through the Underground Railroad, helping to pass them along to Michigan or to Canada.

Daniel Low arrived in Michigan City in May of 1835. Low became involved in helping slaves escape from the south into Canada. Individuals were smuggled on board grain boats at Michigan City harbor, or if they felt they were being watched, they were taken to New Buffalo, Michigan where they were picked up by boats going to Canada. It is believed that approximately one hundred and fifty slaves were transported from Low’s station.