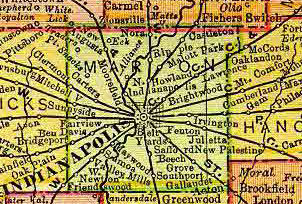 Marion County was named for Francis Marion, a Brigadier General from South Carolina in the American Revolutionary War in 1822. Indianapolis is the County Seat as well as the State Capitol.

John Freeman moved to Indianapolis in 1844 from Monroe, Georgia. By 1850, Freeman had become one of the wealthiest African Americans in Indianapolis; he owned several restaurants and several tracts of land. In 1853, Freeman was arrested for violation of the 1850 Fugitive Slave Act. Freeman was accused of being “Sam,” the escaped slave of Missouri resident Pleasant Ellington. To prove his innocence, Freeman hired some of the most prominent lawyers in Indianapolis to travel to Georgia, Kentucky, Ohio, and eventually Canada to both prove his identity and find the real “Sam.” Freeman was eventually found not guilty of violating the Fugitive Slave Act; in response he sued Ellington for unlawful arrest, a case which he won a $2000 settlement.

Fearing the law would impact them in the same manner as Freeman, and that they would not be able to defend themselves, approximately 20,000 African Americans fled the United States between 1850 and 1860. The Indiana case had a tremendous impact on many of the free African Americans living in Indiana, as they too fled to Canada.