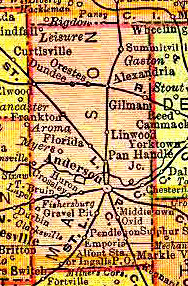 Madison County, lying in central Indiana just north east of Indianapolis, was founded in 1823 and named in honor of the fourth President of the United States, James Madison. While there is much speculation about Underground Railroad activities in Madison County, little solid evidence currently exists. It's known that Quakers, a group prone to both the Abolitionist cause and Underground Railroad activities, were settled in the county.

The great abolitionist leader Frederick Douglass was on a speaking tour of the Midwestern states in 1843. He and several members of the New England Anti Slavery Society were trying to rouse abolitionist support in what was then considered the Western U.S. On Sept. 15, they were to speak at a church meeting in Pendleton, Indiana.

As they tried to speak, a mob stormed the platform, tearing it down and attacking the speakers. Douglass attempted to defend himself and the others by grabbing a club and swinging it vigorously. However, a stone was thrown breaking his hand and another stone knocked him briefly unconscious. Eventually the mob relented, and the party retreated to a house in Westfield.

In Douglass’s autobiography, My Life and Times (1881), he describes all of this in some detail. Douglass died in February of 1895.